Editorial: For China’s Biggest Cities, Migrants Are a Wealth Generator, Not a Burden 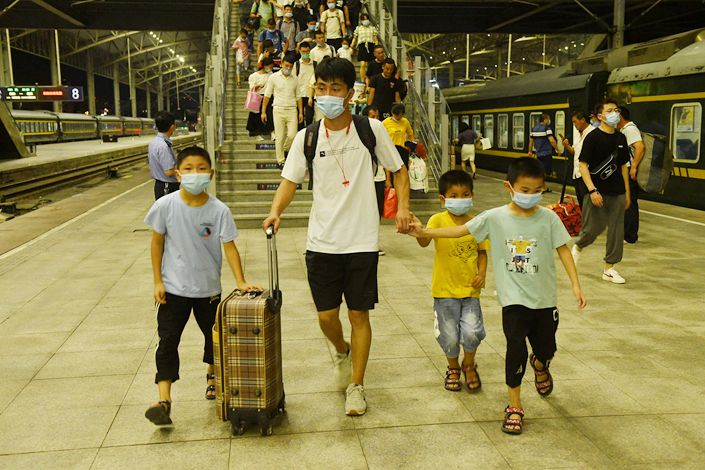 The Fifth Plenary Session of the 19th Central Committee of the Communist Party of China, which is due to take place in October, will discuss recommendations for the country’s 14th five-year plan.

A few days ago, President Xi Jinping convened an expert forum on the subjects of society and economics, where he listened to suggestions. Some experts proposed speeding up the implementation of the development strategy for metropolitan areas and city clusters led by so-called national central cities, with a focus on boosting reform of the household registration systems in large urban areas with populations exceeding 5 million. This recommendation is worth heeding.

In contemporary China, a significant area of unbalanced, incomplete development is the wide urban-rural gap and income gap. According to economic principles, the biggest secrets to urban prosperity lie in economies of agglomeration and scale, which can provide far higher labor productivity than the countryside. However, urbanization also brings costs like higher property prices, pollution and traffic congestion — what people habitually call “city diseases.”

When costs are balanced against benefits, the result of the free flow of resources will be the convergence of urban and rural incomes. But China’s slow and incomplete systemic and regulatory reforms mean that resources cannot be reasonably allocated across these spaces. The difficulty of transforming hundreds of millions of rural migrants into city residents has become an obstacle to the progress of Chinese urbanization. Indeed, urbanization rates differ markedly depending on whether they are calculated according to the number of permanent residents in a given place or according to the number of people with household registration permits for that place.

China has been moving forward with household registration reform for many years, but now finds itself in the so-called “deep waters” of the issue. In recent years, the tone of the debate has become less impassioned. When the relevant government departments have spoken about the key tasks of building new-style urbanization, the thinking behind relaxing household registration restrictions has been to implement a differentiated set of policies depending on the population size of each city.

However, stricter limitations will remain on cities classified as “very large” and “extremely large,” for which the numbers of migrants able to settle according to the points-based household registration system can almost be ignored. People have apparently accepted this rationale without much pushback.

In fact, very large and extremely large urban areas are the best at embodying the benefits of cities. In terms of their economic contributions, labor productivity, or capacity for innovation, small and midsize cities lag far behind larger ones. They also don’t have the same attraction to migrants. The fact that population levels in county-level and third- or fourth-tier cities have not significantly risen in recent years despite relaxing household registration restrictions is ample proof of this.

If large cities of over 5 million people cannot smoothly accommodate migrants as new urban citizens, it will place a severe burden on the overall progress of urbanization in China and gut the significance of household registration reform.

People always bring up the same concerns whenever someone floats the idea of relaxing registration restrictions in extremely large cities. But empirical research shows that many of these concerns are unfounded. For example, a study of 98 major cities found that the same commute in a given city takes on average 1.64 times longer during rush hour than at off-peak times. Even if the number of employed people in that city were doubled, the commute would only take 1.68 times longer during rush hour.

Other research into the impact of urban growth on water resources or pollution has also rejected several concerns that many people take as a given. As a result of our strict controls on population size, China’s large cities have not yet reached their optimum scale compared with their leading global counterparts. Based on larger demographic trends, rural-urban migration in China has already passed its peak. Indeed, in the future many cities may struggle with labor shortfalls.

Failing to bring migrants into the urban fold will unavoidably trigger a series of severe consequences. Unable to easily resettle, the consumption potential of migrants will remain untapped, curbing the expansion of domestic demand and dragging at so-called “internal circulation.”

In addition, because cities need all types of labor to form an organic whole, the exclusion of people from certain social strata will distort the division of labor and bring down productivity, impacting the competitiveness and sustainable development of cities and China as a whole.

It is common knowledge that the importance of the household registration in China is bound up with access to public services. In large cities, especially the biggest ones, there are severe shortages of public goods like education and medical care. Look at education, for instance: While the “hollowing-out” of rural schooling continues apace, migrant children in large cities still find it hard to attend public schools, with the result that many stay in their country hometowns and become “left-behind children.” This phenomenon has been at the center of a number of human tragedies in recent years. Against the background of the coronavirus outbreak, private educational institutions in large cities are caught in a bind, with many ones in financial distress or at risk of bankruptcy. Kindergarten teachers also face particular uncertainty, and some migrant children have been forced to return home.

Admittedly, the incorporation of migrants into China’s cities still faces many difficulties, including systemic entanglements and fiscal costs of tricky issues like pensions, health care and education. These require comprehensive adjustments to the fiscal relationships between central and local governments. However, these difficulties are not a reason for preventing migrants from registering their permanent homes in China’s largest cities. The role of government, after all, is to satisfy the desires of the people to live better lives.

It must be admitted that there are limits to our knowledge about the development norms of people in cities. A classic example is how some cities have consistently given conservative estimates of their populations during previous five-year plans, with the result that public services, which are allocated according to the criteria outlined in the plans, naturally come under increased pressure. Some large cities have previously also made dramatic cuts to the number of kindergartens and primary and middle schools, which have helped create, to a great extent, the fluctuations we see today. Urban populations are decided by industrial structures. Governments at all levels will play indispensable roles in the evolution of industries, but no government can design it exactly. In building the innovative country of today, we previously dispensed with the planned economy. The urban development question requires the same kind of approach.

Accelerating the incorporation of rural migrants into China’s cities will represent a leap forward for the country’s urbanization drive and herald another round of benefits gleaned from undertaking systemic reforms. As the scholars say, if cities strengthen supply-side reform of infrastructure and public services, and accelerate the urbanization of rural migrants, cities enlarge in optimal scope while also realizing the triple targets of economic growth, livability and social harmony. In the final analysis, urbanization is about people. As long as we streamline the system, people will be source of a city’s wealth, not a burden.