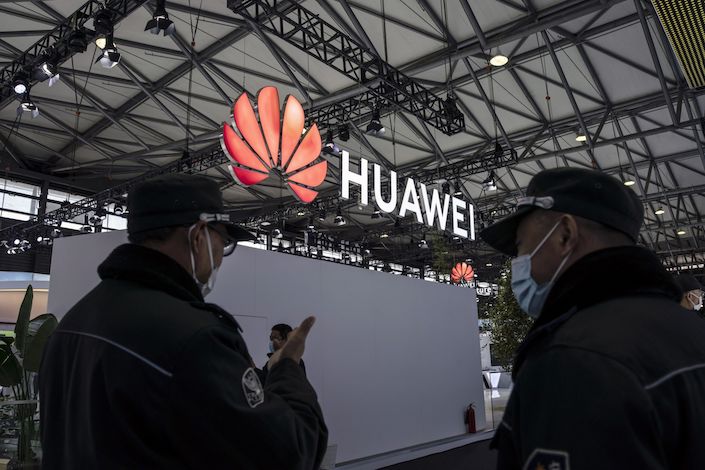 Attendees walk past the Huawei Technologies Co. logo at the MWC Shanghai exhibition in Shanghai

(Bloomberg) — Huawei Technologies Co.’s quarterly revenue shrank for the first time on record, reflecting the devastating impact of American sanctions that forced China’s largest technology company out of smartphones and into other technology arenas.

The disappointing results underscore the damage Washington has wrought on a company that once vied with Apple Inc. and Samsung Electronics Co. to lead the global smartphone market. Huawei reported that revenue fell 11% to 220.1 billion yuan ($33.5 billion) in 2020’s final quarter. That’s down from 3.7% growth in the September quarter and a 23% gain in the second quarter, according to Bloomberg calculations based on previously reported figures.

Full-year sales rose 3.8% and profit 3.2%, in line with the “marginal growth” previously projected, according to financial statements audited by KPMG. Huawei credited record 5G base station orders and strong mobile sales in the first half for offsetting declines in the final six months.

Huawei is emerging from its toughest year on record as Trump administration sanctions smothered its once-leading smartphone business and stymied advances into chipmaking and fifth-generation networking. The Biden White House has shown few signs of letting up, prompting billionaire founder Ren Zhengfei to direct Huawei toward new growth areas such as smart agriculture, health care and electric cars. It hopes for a seat at the table with tech giants vying to define the rapidly evolving fields of connected vehicles, houses and workplaces.

“The global supply chain Huawei heavily relies on has been disrupted,” said Rotating Chairman Ken Hu, one of three executives who take turns filling the top role. “I don’t know who will benefit from it, but definitely not the industry.” The global semiconductor supply chain needs to be overhauled to resolve current shortages, he said.

Cash flow weakened last year as the company built up inventories in advance of U.S. sanctions that effectively cut off its access to American technologies last September, Hu told reporters. Huawei previously purchased $10 billion to $20 billion of components each year from U.S. suppliers.

Huawei is the subject of persistent speculation that it aims to join tech giants from Apple to Xiaomi Corp. exploring automotive technology or designing and assembling entire cars. While Huawei has denied it plans to launch a car under its own brand — which Hu reaffirmed Wednesday — it’s worked with several manufacturers to test its autonomous driving and driver-car interaction technologies.

The company’s information and entertainment features can already be found in Mercedes-Benz sedans. Huawei has teamed up with domestic players such as BAIC BluePark New Energy Technology Co. to develop smart car systems. The first model under its partnership with the Chinese EV maker, the Arcfox αS HBT, will be unveiled at the Auto Shanghai industry expo in April.

It also plans to begin charging mobile giants like Apple a “reasonable” fee for access to its trove of wireless 5G patents, potentially creating a lucrative revenue source by showcasing its global lead in next-generation networking.

The owner of the world’s largest portfolio of 5G patents will negotiate rates and potential cross-licensing with the iPhone maker and Samsung, promising to charge lower rates than rivals Qualcomm Inc., Ericsson AB and Nokia Oyj. Huawei should rake in $1.2 billion to $1.3 billion in patent and licensing fees between 2019 and 2021, executives said, without specifying which of those stemmed from 5G. It’s capping per-phone royalties at $2.50, compared with the $7.50 that Apple says Qualcomm demands of every iPhone.