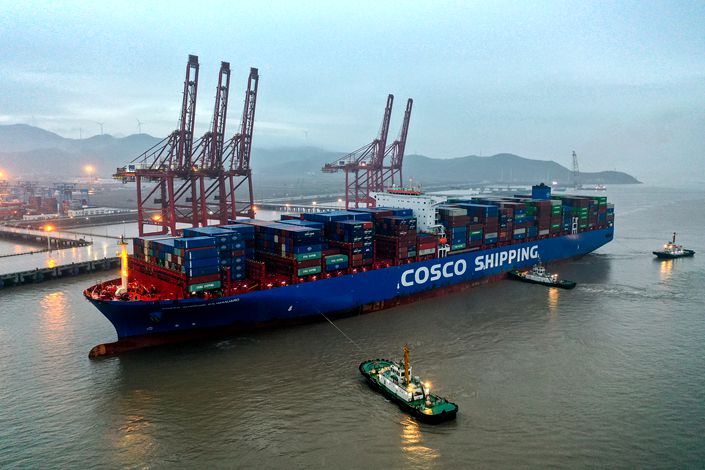 China Cosco Shipping Corp. Ltd. (601919.SH / 01919.HK), the world’s No. 3 shipper by capacity, said it expects to book a stunning jump in profits for the first quarter this year, buoyed by a continued rebound in the ocean freight market as the world economy emerges from the worst of a downturn caused by the Covid-19 pandemic.

Cosco expects to report nearly 15.5 billion yuan ($2.4 billion) in net profit for the first three months this year, a 53-fold surge from about 292 million yuan in the same period in 2020, according to a statement in a Tuesday filing to the Hong Kong Stock Exchange. This will also represent a 158% jump from the previous quarter and a 22-fold jump from 687.4 million yuan the first quarter in 2019.

Investors will need to await the firm’s audited quarterly earnings for an explanation of the surge, which the company did not explain in its filing. Soaring freight prices amid widespread pandemic-driven supply shortages are thought to be a significant factor, after the firm noted that a local index which tracks container prices had increased more than 113% on the same period last year and more than 53% in the last quarter.

The profit increase could also partly be attributed to a low base at the same time last year, when China’s economy along with the rest of the world was locked down during the first months of the pandemic. But it was not clear why profits had surged even compared to the first quarter in 2019, a year before the outbreak.

“By … increasing shipping capacity, securing container supplies and enhancing service quality, the company fully committed to ensuring the global transportation services and achieved an increase in both the amount and price in respect of such services,” the company said in the short statement.

Sea freight along Pacific routes has soared since the second half of 2020, buoyed partly by China’s robust exports, global shipping services provider Clarksons told Caixin last month. China’s exports jumped 60.6% in dollar terms in the first two months on a low base last year, but also due to booming global demand for all kinds of products as the U.S. economy rebounds from the downturn brought by the pandemic.

Shanghai shares of Cosco on Wednesday surged by the daily trading limit of 10% in wake of the late Tuesday announcement, closing at 16.15 yuan per share, representing a 20% gain this year.

“Overseas consumer demand continues to be strong, and the volume and prices of the container market are rising,” analysts at Northeast Securities Co. Ltd. said in a Wednesday report (link in Chinese). “Due to the slowdown in the growth of new shipbuilding orders this year, the total supply of container capacity continues to contract.”

Despite the upbeat forecast, Cosco and its industry counterparts face further delays after the giant container ship Ever Given blocked the Suez Canal for about a week at the end of last month, with the effects likely to continue rippling through the global supply chain for some time to come.

The Suez Canal blockage could cost global trade $6 billion to $10 billion a week, a study by German insurer Allianz showed.

“The recurrence of epidemic outbreaks overseas (especially in Europe) and the Suez Canal blockage continued to aggravate the problem of port congestion and slow the return of containers, boosting container prices, which remained at a high level,” said the Northeast Securities report.

The net profit surge reflects what Cosco described as continued growth of the container shipping market, adding that in the first quarter, the average value of the China Containerized Freight Index, which shows the fluctuation of freight rates, posted a 113.33% year-on-year increase and 53.8% quarter-on-quarter growth.

Pressured by the economic downturn due to the pandemic, Cosco has been aggressively expanding its capacity, adding 12 ships each with a capacity of 23,000 twenty-foot equivalent units (TEUs) in 2020, according to its annual report.

Cosco’s capacity continued to rank third in the world at the end of last year, with 536 vessels boasting a total capacity of nearly 3.1 million TEUs, it said in the annual report.