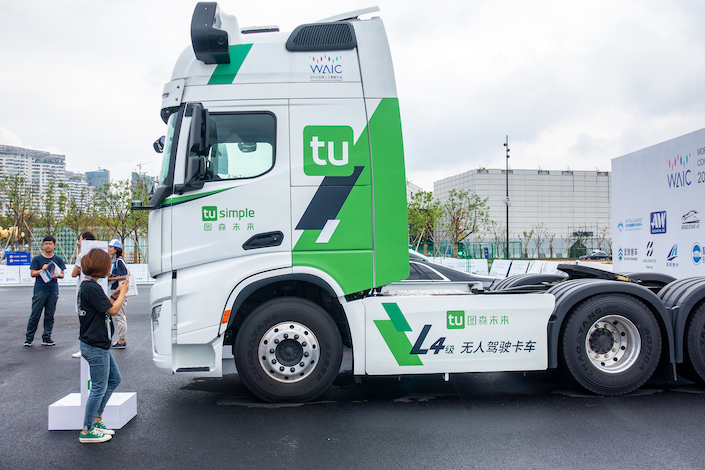 Chinese-backed self-driving truck startup TuSimple plans to raise $800 million to $1 billion in its initial public offering on the Nasdaq, eyeing a valuation between $5 billion and $7 billion, people familiar with the matter told Caixin.

The 6-year-old startup filed for the U.S. share sale March 23, putting it on course to be the first of its peers to go public. The stock is set to debut April 15, sources said.

San Diego-based TuSimple, with big backers on both sides of the Pacific, specializes in research and development of Level 4 autonomous driving technology for trucks. Level 4 autonomous vehicles can drive themselves in certain circumstances, but a human driver may sometimes need to take control. Level 5 is the highest level of automation.

TuSimple’s backers include U.S. logistics giant UPS, tech leader Nvidia, CDH Investments and Sina Corp. affiliate Sun Dream, which have poured a total of $800 million into the company since its founding in 2015, according to a prospectus released in March.

But the company’s China connections have caught the attention of U.S. regulators. The Committee on Foreign Investment in the U.S., or CFIUS, is probing Sun Dream’s investment in TuSimple citing national security concerns, according to the company’s filing. Autonomous driving technology is considered critical for the Department of Defense.

If the deal succeeds, TuSimple will be the first driverless technology company to list. Investors have eyed the technology as a way to overcome the long-haul limits of human truck drivers.

Compared with passenger cars, trucks are regarded by some as low-hanging fruit in the push to commercialize self-driving vehicles because they tend to operate in relatively predictable conditions such as on highways.

TuSimple operates 70 Level 4 driverless trucks, 50 of which are in the U.S., with the rest in China, according to the prospectus. The company has about 5,700 pre-orders so far.

TuSimple expects to continue losing money, the prospectus shows. It does not intend to start mass production until 2024.

TuSimple began testing self-driving trucks on Arizona’s Interstate 10 in August 2018. Less than a year later, it partnered with UPS on a freight route between Phoenix and Tucson, Arizona. The company also joined the first artificial intelligence pilot trial in Shanghai, carrying goods between Yangshan Port and Luchaogang Railway Station.

In July, the company reached a strategic agreement with Navistar, one of the largest commercial vehicle manufacturers in the U.S. Two months later it teamed up with Volkswagen AG’s truck heavy truck unit Traton Group.

TuSimple says it has built an autonomous freight network consisting of shippers, carriers, railways, freight brokers and truck owners, and it hopes to take a big chunk of the $4 trillion global truck freight industry.

Guo Xin contributed to this story.