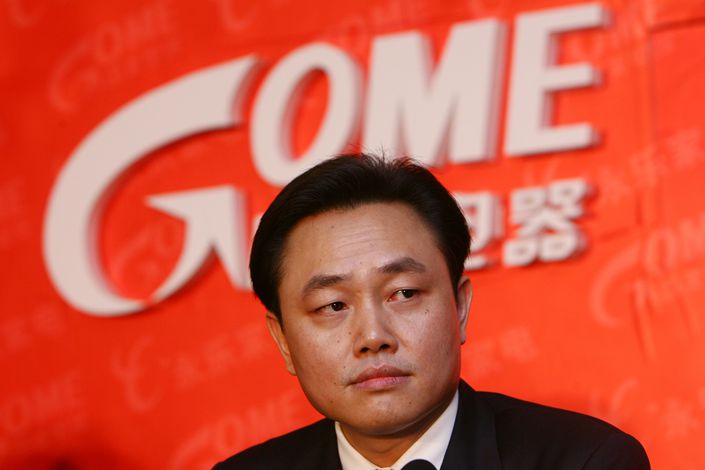 Huang Guangyu has also been building alliances with e-commerce platforms, seeking to gain more clout in the important area that languished during his imprisonment. Photo: VCG

Struggling former retail superstar Gome Retail Holdings Ltd. is planning a major expansion of its traditional brick-and-mortar stores, its founder Huang Guangyu revealed late on Wednesday in his first public remarks since retaking the helm of his business after a lengthy prison term.

Gome was an early pioneer in China’s retail sector in the 1990s and early 21st century, known for its slick chain of stores that contrasted sharply with the drab and customer-unfriendly retailers of the planned economic era. As the head of that empire, Huang was even named China’s richest man at one point.

But in 2010 he was sentenced to 14 years in prison and fined 600 million yuan ($92 million) for bribery, insider trading and illegal business operations. He was released early last June for good behavior, but returned to a vastly different company from the one he left just a decade earlier.

In his Wednesday remarks, he said the company would aim to boost its store count to more than 6,000 within the next 18 months, representing a sharp rise from its more than 3,400 stores at the end of last year. The enlarged network would be aimed at providing more communities with the option of quickly picking up items at nearby stores after buying them online, mirroring a similar combination online-offline strategy practiced by many retailers.

During Huang’s time in prison, his wife, Du Juan, oversaw the business as CEO but without the same success as her husband. Gome’s revenue has dropped for three consecutive years, and it has reported losses for the last four as it fell increasingly behind savvier online peers.

To revive the company, Huang, now 52, has suggested expanding beyond Gome’s traditional home appliance focus, and doing more to bring entertainment elements into its online business. As part of its efforts in the latter area, the company added three video shopping channels to its platform this year and rolled out a new entertainment-themed app.

Huang has also been building alliances with e-commerce platforms, seeking to gain more clout in the important area that languished during his imprisonment. Gome sold $100 million worth of convertible shares to JD.com and $200 million to Pinduoduo between April and May last year, and announced strategic tie-ups with the pair of e-commerce giants.