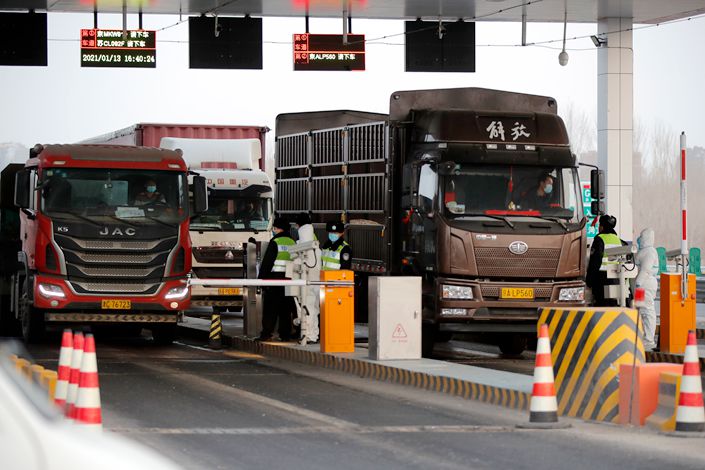 Chinese truckers have long complained of arbitrary or excessive fines for perceived infractions of traffic rules. Photo: The Paper

Chinese authorities are investigating the suicide of a truck driver who was fined around $300 for using his vehicle without a functioning global positioning device, in a case that has drawn public attention to the travails of the country’s truckers.

Jin Deqiang, a 50-year-old driver from North China’s Hebei province, died Monday after drinking pesticide at a vehicle inspection site, according to a government statement.

Hours before, Jin wrote a message on popular social messaging app WeChat slamming local traffic police for fining him and claiming he planned to use the pesticide to kill himself and “awaken the leadership to the importance of this matter.”

Chinese truckers have long complained of arbitrary or excessive fines for perceived infractions of traffic rules.

Relatives of Jin told Caixin he set out Monday from Tangshan, a city of 7.5 million people in Hebei, to deliver goods to a client in Langfang, a commuter city around 180 kilometers away that lies adjacent to the Chinese capital, Beijing.

As he passed through the Tangshan district of Fengrun, traffic police pulled Jin over to inspect his vehicle’s load, the relatives said. On seeing that the truck’s Beidou satellite tracker was unplugged, the officials handed Jin a fine of 2,000 yuan ($305).

Chinese law requires road-going freight vehicles to run satellite navigation systems to monitor drivers and prevent accidents, with potential fines of between 2,000 yuan and 5,000 yuan for those who refuse to comply or deliberately impair the devices’ operations.

Contacted by Caixin, the local district’s transport bureau said it was not clear under which specific provision of the law Jin had been punished.

Seemingly outraged at the fine, Jin vented his frustration on WeChat. “It’s not that I’m not worth 2,000 yuan; I just want to say a word on behalf of us truckers,” he wrote. “They’ve fined me … because my Beidou isn’t working, but how are drivers like us supposed to know that?”

According to his relatives, Jin initially remonstrated with the police, to no avail. At around 3:30 p.m., he bought a bottle of pesticide and drank its contents at the inspection site.

Nearby workers took him to hospital, but he died at 11:50 p.m. He is survived by his elderly mother and three children.

In a statement Tuesday, the Fengrun government said paramedics were called Monday to a vehicle inspection site following a “sudden incident of a driver consuming pesticide” but were unable to save the driver’s life. Authorities have launched an investigation, the statement added.

Experts said the fine issued to Jin was illustrative of China’s patchy system for upholding the rights and interests of truck drivers.

Industry specialist Wang Jinwu told Caixin it was common for positioning systems to go offline due to either human causes or technical problems like blind spots in the mobile networks that satellites use to communicate with onboard devices.

Often, drivers are unaware that their vehicle’s satellite positioning system is not working until they undergo inspections, Wang added.

China has around 30 million truck drivers, statistics show. A 2016 report showed that China’s truckers pay an average of 2,974 yuan per year in fines for misdemeanors like running red lights, parking illegally, speeding or overloading.

The following year, the country’s transport ministry ordered a crackdown on the widespread practice of slapping drivers with penalties that have no legal basis.