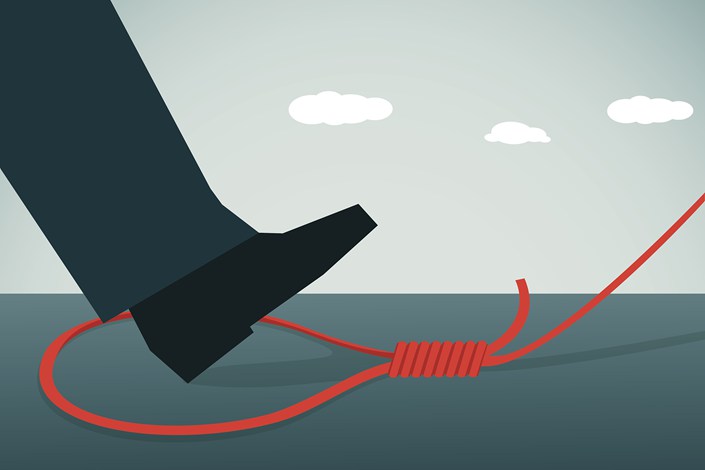 The predatory lending of a Northwest China gang led to the criminals illegally pocketing 2.8 billion yuan ($428 million) and driving 89 people to commit suicide, according to a recent state media report.

China’s law enforcement bodies have been cracking down on such practices for several years, going after criminal loan sharks and the big data companies that have helped them gather borrowers’ personal information.

The gang based in Lanzhou, Gansu province, used internet platforms to issue loans to more than 390,000 people, according to a report (link in Chinese) on the case broadcast by national broadcaster CCTV. Due to sky-high interest rates, these loans were virtually impossible to repay, leading to dozens of suicides amid violent debt collection.

The crooks issued loans worth nearly 6.3 billion yuan before the local police busted the gang in 2019, arresting 253 suspects and closing down 1,317 illegal loan issuance apps and websites, the report said.

In April 2019, the country’s police, top court, top prosecutor and Ministry of Justice issued a document (link in Chinese) that defined predatory lending and clarified how the law deals with relevant investigations and trials.

Predatory lending is a practice in which unscrupulous lenders use various means to deceive or coerce borrowers to take out loans they don’t need or can’t afford, and that carry unfair or abusive terms. Violence and threats are often involved during debt collection.

A court document (link in Chinese) showed that the Lanzhou gang’s ringleader, Wang Tao, started the illicit enterprise in 2018. Beginning that year, he and his accomplices registered over 20 shell companies and rolled out 21 loan apps that were linked to third-party payment service YeePay.

These apps concealed their true purpose, appearing at first glance to be offering services such as recipes, drawing or weather. However, they had hidden ID recognition and credit evaluation features to facilitate the gang’s lending, according to the court document.

The apps claimed that the loans required no collateral and were interest-free for a certain period to obscure the fact that the real annual interest rates demanded were between 1,300% and 5,215%, the court document showed.

In the debt collection process, the gang threatened borrowers, including by harassing their family and friends and spreading photoshopped obscene images.

Wang was sentenced to life imprisonment in September 2020, and 18 others were sentenced to five to 20 years in prison.