Singapore’s Heng Swee Keat Steps Aside as Next Prime Minister 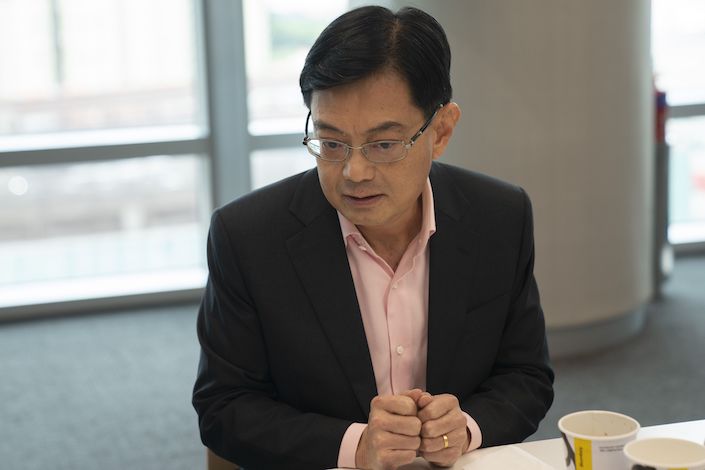 Heng Swee Keat, Singapore’s deputy prime minister, stepped aside as the designated successor to Prime Minister Lee Hsien Loong, setting off a major shakeup in the transition of leadership in the city-state.

Heng said Thursday he was relinquishing his position as the unofficial leader of the so-called fourth-generation (4G) group of leaders of the ruling People’s Action Party (PAP) who are slated to succeed Lee and his contemporaries. Heng cited his age and the long-running challenges of the Covid-19 pandemic.

Heng said he will remain as deputy prime minister but will relinquish his finance portfolio in the next cabinet reshuffle in two weeks.

Political analysts were surprised by Heng’s decision. Koh Chin Yee, an expert at the National University of Singapore, said Heng’s decision will lead to a major restructuring of the country’s cabinet involving some key positions.

“It won’t be soon” for the next successor of Lee to be settled, Koh said.

“This year I am 60,” Heng said in a letter to Lee. “When I also consider the ages at which our first three prime ministers took on the job, I would have too short a runway should I become the next prime minister then.”

Heng said the pandemic meant that he would most likely be too old to take over as prime minister “when the crisis is over” roughly five years from now. He said a younger person should assume leadership instead and he stands ready to support whomever party officials choose.

“We need a leader who will not only rebuild Singapore post-Covid-19, but also lead the next phase of our nation-building effort,” he wrote.

Singapore's first prime minister, Lee Kuan Yew, was 35 when he took on the job in 1959. His successor Goh Chok Tong was 49, and Lee Hsien Loong was 52.

In a joint briefing with top leaders Thursday, Lee Hsien Loong said he respected the decision. Lee, 69, is the son of the late Lee Kuan Yew.

“Succession remains an urgent task and cannot be put off indefinitely,” Lee said. “I think it’ll take longer than a few months, but I hope they’ll reach a consensus and identify a new leader before the next general elections. I have no intention of staying on longer than necessary.”

Asked if he would stay on for five more years, Lee said: “I hope not. I will stay on a bit longer so that the new successor can be identified, can get ready, and as soon as he’s ready, I’ll like to hand over to him.”

While Lee previously signaled his intention to step down by the time he turns 70 in February 2022, last year he reaffirmed a pledge to stay until the country was in “good working order” following the weakest election performance ever by his ruling PAP.

In a separate statement Thursday, the 4G group of younger party leaders said they respected Heng’s decision and asked Lee “to stay on as prime minister until such time when a new successor is chosen by the team and is ready to take over.”

The 4G group had picked Heng as leader, essentially appointing him as the PAP’s next leader and consequently the country’s next prime minister.

“This unexpected turn of events is a setback for our succession planning,” the 32-member group said in a statement. “We recognize that Singaporeans will be concerned. We seek your support and understanding as we choose another leader.”

The Singapore dollar was little changed against the greenback, as was the U.S.-listed iShares MSCI Singapore ETF in premarket trading.

A career civil servant and politician, Heng is deputy prime minister and finance minister. His soft-spoken nature and collaborative approach won him allies in the business community, but a poorer-than-expected showing in the 2020 elections drew questions about his popularity and threw the timetable for succession into doubt.

“It was pretty clear from the election that he didn’t garner a strong mandate for himself as a potential incoming prime minister,” said Bridget Welsh, honorary research associate at the Asia Research Institute, University of Nottingham Malaysia. “There was an attempt to wait for some time after the election for any changes within the leadership structure.”

In a press briefing Thursday, Heng said the showing in the last election wasn’t the reason he stepped aside.

“I do not want to take on any job which I cannot deliver,” Heng said. “As those of you who have worked with me know, I am a workaholic, and I put my heart and soul into what I do, and therefore I’ve been thinking about it as to whether I am the right person.”

Heng was poised to become Singapore’s fourth prime minister since 1965, a period of uninterrupted rule by the PAP. His ascent would have heralded a change in leadership style for the nation, which for all but nearly 14 years has been run by Lee or his father.

Lee, who came to power in 2004, has been one of the world’s most vocal leaders calling for the U.S. and China to avoid a destructive clash that could force smaller countries like Singapore to choose sides on everything from trade and technology to Covid-19 vaccines and territorial disputes in the South China Sea. The city-state supports a strong American presence in Asia by allowing the U.S. to use its military facilities while also counting China as its top trading partner.

Singapore’s economy is showing signs of getting back on track from the worst slump in its history. Economists see Singapore’s growth recovering to a 5.9% pace this year, helped by about S$100 billion ($74 billion) in fiscal stimulus, following a 5.4% contraction in 2020 — the country’s worst performance since independence.

The shakeup Thursday is “hugely politically significant” given how carefully Singapore manages the succession process, according to Eugene Tan, an associate professor of law at Singapore Management University.

“The next few years are going to be critical,” Tan said. “How each minister deals with the pandemic — all that will come under scrutiny.”