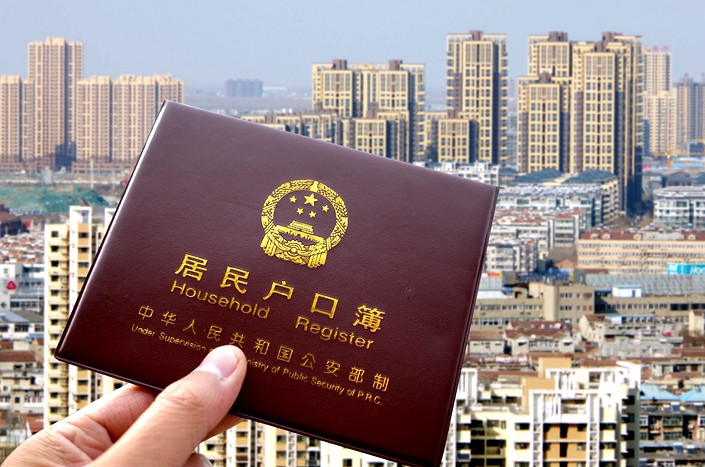 China’s household registration system allows a person to access key public services such as education and health care within the area covered by their registration. Photo: VCG

China plans to make it easier for migrants to apply for household registration in cities by putting renters on an equal footing as homeowners, said the nation’s top economic planning agency.

Authorities should facilitate certain rural migrants in obtaining urban household registration, or a “hukou” (户口), including those who have worked and lived in those areas for more than five years and students who study in cities, the National Development and Reform Commission (NDRC) said in a document (link in Chinese) issued Monday.

The policy is the latest effort by authorities to grow cities and expand the urban population, as policymakers push forward with urbanization during the 14th Five-Year Plan which runs from 2021 to 2025, a drive that economists see as having potential to raise incomes and boost domestic demand

Relocating hundreds of millions of rural residents, as well as migrant workers, to towns and cities and giving them official status as permanent urban residents will lead to higher wages, increased productivity and ultimately higher consumption, economists say.

Authorities should completely abolish restrictions on migrants applying for household registration in cities with fewer than 3 million people, the NDRC document said, reiterating a 2019 policy.

It also said cities that have launched points-based application systems for household registration should give greater weighting to how long applicants have contributed to the social insurance scheme and the time they have resided in the cities.

China’s household registration system allows a person to access key public services such as education and health care within the area covered by their registration, meaning many rural migrants living in cities, but without an urban hukou have struggled to enjoy these vital resources.

The household registration system has brought inequalities, resulting in a large welfare gap between urban and rural residents, according to a report (link in Chinese) last year from the Center for International Knowledge on Development, a state-backed think tank.

The government has issued policies in an effort to reform the household registration system over the past few years in an attempt to ease residency restrictions in small and midsize cities.

In the Monday document, the NDRC also vowed to promote basic urban public services to cover those people who live in urban areas but do not have the local hukou.