By Liu Yukun and Matthew Walsh 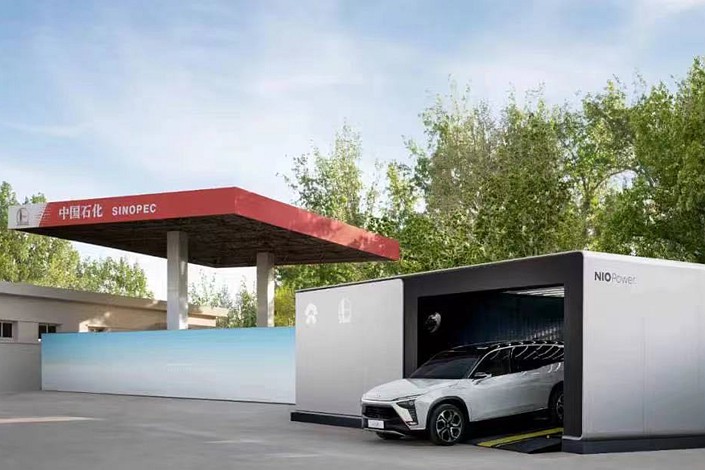 Tesla challenger Nio Inc. has signed a strategic tie-up with Sinopec Corp. that will see the Chinese automaker install 300 battery changing points within the state oil giant’s vast network of gas stations by the end of the year.

The deal will bring Nio’s total number of changing points in China to 500, founder Li Bin said Thursday at a launch event for the first such facility at a Sinopec station in southeastern Beijing.

Battery changing is an alternative way to power new energy vehicles (NEVs). Instead of recharging existing batteries, the points swap empty cells for fully charged ones.

China’s government has promoted the expansion of NEV battery charging and changing points as part of a broad push to develop different kinds of “new infrastructure” to drive growth over the next decade.

Nio’s expansion would increase the number of such points available in China by a significant margin. Officials at an event organized by State Grid Corp. of China in November said 538 battery changing stations and 43,000 electric vehicle charging stations and had been installed nationwide, according to Chinese media reports.

Nio’s President Qin Lihong said at the same launch event that the two companies would collaborate nationwide, adding that more than 100 changing points were already being promoted within the oil titan’s network.

Sinopec operates the most gas stations of any company in China, accounting for around one quarter of the market, according to a 2019 report by consultancy firm Deloitte.

Nio has focused on battery swaps as a way to mitigate the problems of equipping cars with fixed cells, many of which have comparatively short lifespans that carry high replacement costs and bring down the vehicles’ residual value.

The company set up a battery subsidiary last year in the central Chinese city of Wuhan and allows customers to purchase cell-free vehicles and rent the batteries separately.

China, the world’s largest NEV market, last year listed battery recharging and replacement in its government work report alongside a suite of infrastructural technologies it hopes will power economic development in the coming years.

Official bodies including the Ministry of Industry and Information Technology have also urged businesses to develop battery-changing models.

But the method has its own limitations, including its need for high capital investment to set up changing points and the limited capacity for China’s regional power grids to recharge huge numbers of swapped-out cells.