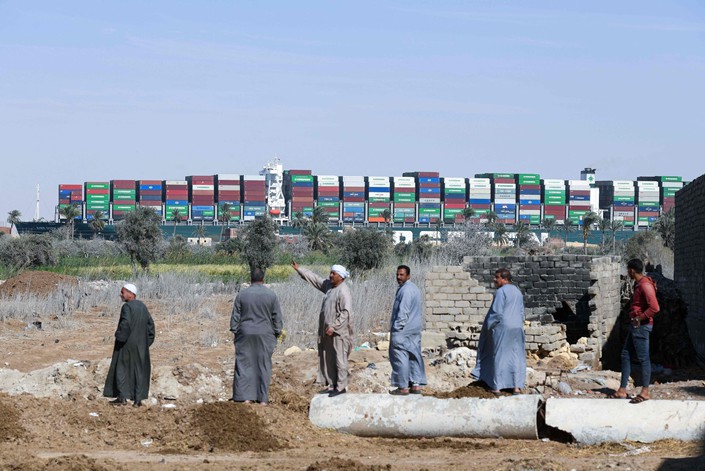 The cargo ship Ever Given is seen on March 29 after running aground in the Suez Canal in Eygpt six days earlier. Photo: VCG

Chinese companies with goods on the Ever Given are facing mounting losses due to even longer delays getting their shipments delivered after Egyptian authorities seized the giant cargo vessel and demanded almost $1 billion in compensation for blocking the Suez Canal for about a week.

Setting out from Kaohsiung in southern Taiwan, the now freed container ship made stops at ports including Qingdao, Shanghai and Ningbo, with estimates that over 80% of the goods aboard are from Chinese companies, according to data from freight logistics platform Yunquna. The data showed that the Ever Given was loaded with 18,300 containers carrying goods worth about $3.5 billion.

The Ever Given blocked maritime traffic in both directions for about a week through the Suez Canal, which carries about 12% of global trade, after running aground at the end of last month. The UK P&I Club, an insurer for Shoei Kisen Kaisha Ltd., the Japanese owner of the Ever Given, said in a statement Tuesday that the owners of the vessel on April 7 received a $916 million claim from the Suez Canal Authority (SCA), which operates the waterway.

“The P&I aspects of the claim are relatively modest, with the exception of a claim for loss of reputation, which is disputed,” the U.K. insurer said. The compensation demanded by the SCA includes $300 million for loss of reputation. However, the ship owners and the SCA have yet to reach a consensus on the claim, and the SCA on Tuesday impounded the ship and detained its crew.

A representative from a Chinese trade company, which has goods filling three containers on board the Ever Given, told Caixin that the firm is incurring huge losses as it can’t secure final payment, which accounts for about 30% of the total, from its European buyers until the goods arrive in the port of Rotterdam.

Taiwan’s Evergreen Marine Corp., the vessel’s operator, said in a statement Wednesday that it is urging all concerned parties to facilitate an agreement, and that it is “investigating the scope of such a court order and studying the possibility of the vessel and the cargo on board being treated separately.”

Evergreen has previously said that it’s not responsible for delays of any cargo as agreements with clients don’t guarantee arrival times.

“There is almost no chance that we will be sought to pay compensation,” Evergreen Marine President Eric Hsieh said earlier this month at a briefing in Taipei.