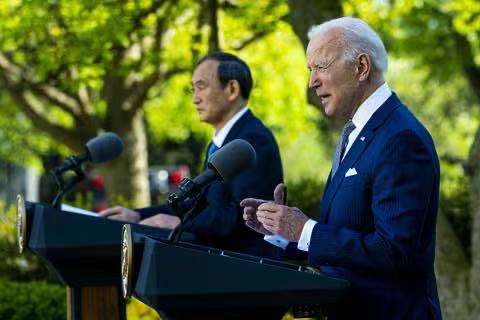 “We underscore the importance of peace and stability across the Taiwan Strait and encourage the peaceful resolution of cross-Strait issues,” according to a joint statement issued after the meeting, which was Biden’s first in-person meeting with a foreign leader since taking office on Jan. 20.

The last time the U.S. and Japan mentioned Taiwan in a joint statement was in 1969 when then-U.S. President Richard Nixon held talks with Japanese Prime Minister Eisaku Sato.

“We committed to working together to take on the ‘challenges’ from China and on issues like the East China Sea, the South China Sea, as well as North Korea,” Biden said at a joint press conference after the meeting, “to ensure a future of a free and open Indo-Pacific.”

On Saturday, China protested the statement through its embassy in the U.S. The spokesperson expressed “strong concern and firm opposition” to the China-related comments, which went “far beyond the scope of normal development of bilateral relations.”

At the press conference, Suga also revealed that Biden reiterated the U.S.’ obligation to defend Japan under the Japan-U.S. Security Treaty also applies to a group of islands in the East China Sea that China and Japan both claim. China calls them the Diaoyu Islands, and Japan calls them the Senkaku Islands.

At a press briefing Thursday, Michael Green, senior vice president for Asia and the Japan Chair at the Center for Strategic and International Studies (CSIS), identified that the most significant goal of the summit was for Suga and Biden to build a personal relationship.

“The two countries and the two leaders have placed a lot of bets on their alliance,” Green said, especially when the Democratic People’s Republic of Korea (North Korea), the Taiwan Strait and technological competition have an impact on the regional situation.

The two leaders had a 20-minute, one-on-one meeting during which they were only accompanied by their interpreters.

Prior to his trip to the U.S., Suga and Biden attended the first Japan-Australia-India-U.S. Leaders’ Video Conference. Later, U.S. Secretary of State Antony Blinken and Secretary of Defense Lloyd Austin visited Japan on their first overseas trip in the new administration.

Meanwhile, the joint statement was short on strong wording about the ongoing crisis in Myanmar. Japan, which has a large economic presence in the protest-roiled country, is more willing to compromise than the U.S. on whether to put a lot of pressure on the ruling military regime.

Regarding economic security, the U.S. and Japanese governments have been working to strengthen the supply chain of strategic technical components such as semiconductors.

According to Japanese media, Suga also plans to hold a virtual meeting with Pfizer Inc.’s CEO Albert Bourla to possibly negotiate an additional purchase of up to 100 million doses of the Pfizer-BioNTech Covid-19 vaccine.

Another highlight of the meeting was the fate of the Tokyo Olympic Games, which are scheduled to begin in late July. Earlier media reports said that Suga hoped to invite Biden to visit Japan during the event.

The joint statement, however, only lightly touched on this, saying Biden supports Suga’s “efforts” to safely hold the games this summer.

Du Zhihang contributed to this report.