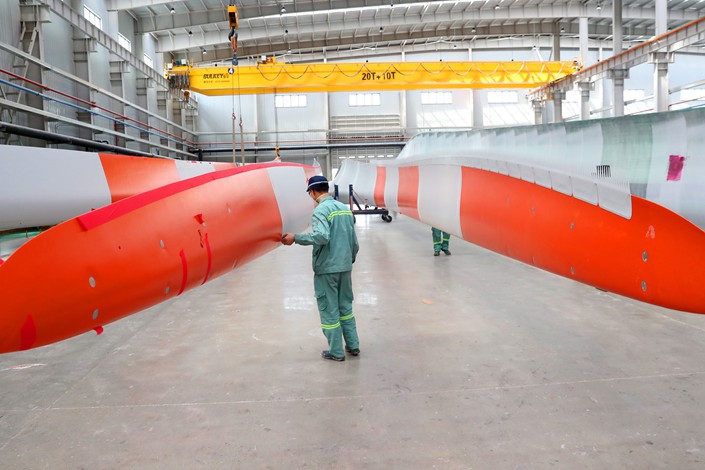 Many companies noted in their annual reports that sales were being buoyed by the rush to build new wind power farms to take advantage of subsidies that ended last December for land-based projects and separate subsidies that will end later this year for sea-based projects.

“The countdown is on for national subsidies. The year 2020 was a rush for land-based wind power. And 2021 will become a rush for sea-based wind farms,” said Ming Yang Smart Energy Group Ltd. (6016015.SH), whose annual report showed its sales last year rose 132% to equipment with 5.7 gigawatts (GW) of capacity.

But while sales growth was strong, stiff competition led to far slower profit growth. Goldwind’s annual profit rose by a more modest 34% to about 3 billion yuan ($460 million), while Shanghai Electric and Dongfang Electric posted profit gains of 45% and 34%, respectively.

Wind power and other non-fossil fuel forms of energy are getting an increasing boost in China’s economic planning, slated to grow to 20% of all consumption from 15.9% over the course of the country’s current five year plan that runs from 2021 to 2025. The technology is also benefitting from increasing efficiency that is making it cost-competitive on its own without government subsidies.

The drive to greater use of non-fossil fuel power comes as China aims to reach peak carbon emissions by 2030, and become carbon neutrality by 2060.

Many industry experts believe that despite the end of subsidies, demand for new wind power projects will continue to be strong under the current Five Year Plan’s ambitious targets. As that happens, wind could go from being a supplemental source of power generation to a primary source within the next five to 10 years, Sinoma Science & Technology Co. Ltd. (002080.SZ) said in its annual report.

A report published last week by Capital Securities forecast that tenders for land-based wind projects exceeded 10 GW in this year’s first quarter, up 132% year-on-year and exceeding previous market expectation. “Under the long-term dual carbon vision, enthusiasm from central and local state-owned enterprises is high, and the bidding prices for wind turbines has stopped falling and stabilized. The industry has entered a stage of healthy development,” the report said.