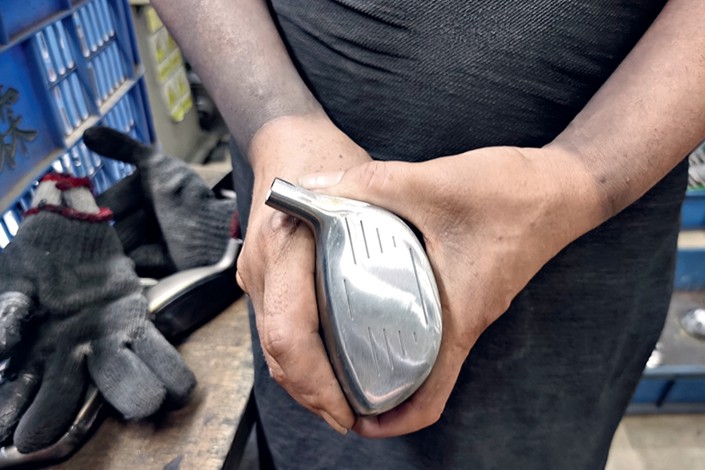 A worker holds a golf clubhead that has been ground and polished by a vibration machine. Photo: Huang Shulun/Caixin

More than 100 workers suffering from long-term exposure to vibrating machinery at a golf equipment factory in southern China are seeking alternative resolutions after being denied adequate compensation through the courts.

Their plight has raised questions about potential gaps in existing regulations covering occupational health compensation, as well as doubts over local judicial authorities’ handling of the workers’ lawsuits.

HAVS is an irreversible medical condition caused by long-term exposure to vibrating tools, according to the Canada-based Centre for Research Expertise in Occupational Disease. People who have contracted HAVS display symptoms including tingling, numbness, loss of finger sensation and dexterity, and loss of hand strength and can suffer vascular damage.

Many of the affected workers filed lawsuits against the company to Zhongshan First People’s Court between 2015 and 2020, demanding compensation of up to 800,000 yuan ($123,133) per person. However, few of them succeeded.

The major problem facing the workers is that the current occupational disease classifications do not specify the HAVS, a lawyer familiar with the matter told Caixin.

The 2017 Classification of Severity of Disability Caused by Physical Injuries doesn’t include a provision for assessing the level of disability suffered through HAVS. This has worked against employees who want to calculate compensation based on the regulation, the lawyer said.

Also, many workers consider the Zhongshan First People’s Court’s handling of trials related to HAVS to be controversial. The court first ruled in favor of a worker’s request for compensation in 2018, but rejected another in January this year.

In April 2018, according to public legal documents seen by Caixin, the court ruled that the company should compensate a worker who suffered from HAVS with settlement valued at 620,000 yuan. In a second trial, the Zhongshan Intermediate People’s Court upheld the verdict but reduced the compensation amount to 310,000 yuan.

But that did not happen to Liu Yimin, a HAVS sufferer who has been operating heavy machinery to grind golf clubheads for nearly 20 years at the company. He filed a lawsuit seeking compensation from the company, but his claim was rejected by Zhongshan First People’s Court in January.

A total of 58 cases related to Guangsheng received similar judgments prior to 2021, a lawyer familiar with the matter told Caixin, while the Zhongshan First People’s Court conducted a retrial this January and rejected most of the compensation claims.

Many workers who received almost no compensation for their injuries said they felt “exhausted” after their cases lasted from two to four years.

It remains unclear why the courts have ruled differently in similar cases.

Earlier this year, three more workers from Guangsheng were diagnosed with HAVS and were sent to Guangdong Province Hospital for Occupational Disease Prevention and Treatment for medical observation. A hospital worker refused to disclose further details to Caixin.

In 1957, the former Ministry of Health listed “local vibration disease” as a statutory occupational disease, and later renamed it as “hand-arm vibration disease.” The manufacturing hub of Guangdong reported 70 HAVS cases in 2017, accounting for 7.25% of the total number of occupational cases, public figures showed. Fifty-six of the 70 cases were from golf equipment manufacturers, Caixin has learned.

Many manufacturing industry insiders have called on local authorities to accelerate the study and development of health standards applicable to vibration operations in factories, and limit operating hours and vibration intensity to ensure a safe and healthy workplace. They have also suggested measures such as adopting shift work and mandatory breaks to reduce the time that workers come in contact with vibrating equipment.

As there is no effective treatment or cure for HAVS, insiders said the key to preventing workers from contracting the disease is technology innovation and improved mechanization.