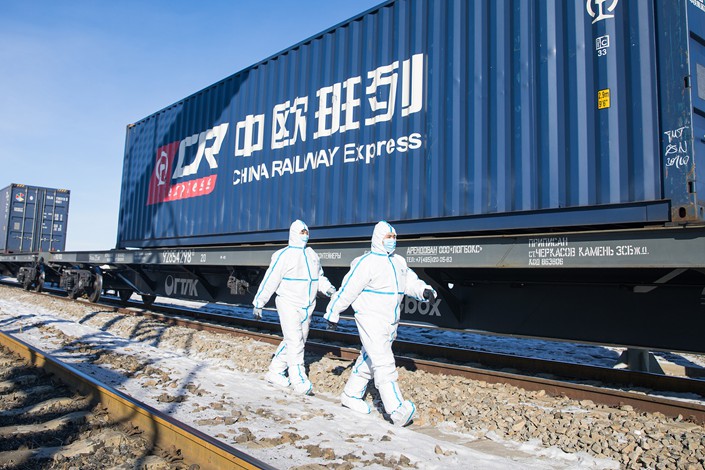 Eskelund’s comments come as rail freight trade between China and Europe surged last year. In 2020, China-Europe freight trains made a total of 12,400 trips, up 50% from the previous year. They shipped nearly 1.14 million standard containers, up 56% year-on-year, according to data (link in Chinese) from railway operator China State Railway Group Co. Ltd.

In the first quarter of this year, the total number of freight train trips rose 75% year-on-year to 3,398, and they shipped 322,000 containers, up 84% year-on-year, the National Development and Reform Commission said at a Monday briefing (link in Chinese).

Eskelund also said that there needed to be a boost in exports from Europe to China to facilitate more balanced bilateral trade growth.

The background: Government subsidies have been essential to bolstering the growth of rail freight between China and Europe on the service that started in 2011. To nurture the market and attract supplies of goods in the initial stages, local governments across China offered subsidies to rail operators for items transported. Some still rely on these subsidies to cover costs linked to rail movements, containers, trailers and other services.

In 2020, China overtook the U.S. and became the largest trading partner of the European Union. That year, the bloc’s imports from China rose by 5.6% to 383.5 billion euros ($460.5 billion), and the exports increased by 2.2% to 202.5 billion euros, according to data released in February by EU’s statistics office Eurostat.