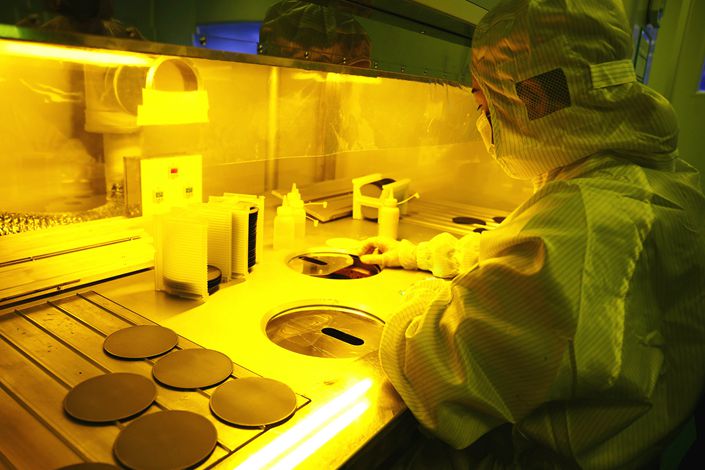 Many carmakers may continue to experience chip shortages for the next two months before starting to see some improvement, Bosch China Executive Vice President Xu Daquan told Caixin. Photo: VCG

A global chip shortage that has dogged carmakers since late 2020 is likely to peak in the current quarter, before starting to ease in the second half of the year, the China chief of leading global auto components supplier Bosch Group told Caixin in an interview.

The shortage of chips used in cars was first noted by some automakers as early as last December and led many to slow or even halt production, including in China, the world’s largest auto market. The result has been the accumulation of other car components, and a growing backlog of unfulfilled orders, putting a crimp on the global economic recovery.

Many carmakers may continue to experience chip shortages for the next two months before starting to see some improvement, Bosch China Executive Vice President Xu Daquan told Caixin in an interview on the sidelines of the Shanghai Auto Show taking place this week in China’s commercial capital.

But he added the problem won’t be solved until the world’s largest foundry, Taiwan Semiconductor Manufacturing Co. (TSMC), can meet global demand from the hungry sector. Accordingly, he predicted supplies will continue to be tight through next year.

“Historically, the number of cars in (production) channels is equivalent to 1.5 to two months of sales,” Xu told Caixin. “If the chip supply can recover slightly in the third or fourth quarter, carmakers will boost production … so that this year’s car sales may not be too bad.”

Reflecting the broader situation, TSMC Chief Executive C.C. Wei said last week the car chip shortage is likely to persist throughout 2021 due to supply exceeding demand, and is likely to extend into next year as well. He added that chipmakers are actively adding capacity to meet the strong demand, and that some of that should start to come on stream from the third quarter.

Japanese giant Toyota was one of the first players to note the problem in China, saying in January it had to temporarily shut down several production lines due to the shortage. A month later officials from the country’s Ministry of Industry and Information Technology encouraged chipmakers to place importance on the China market and boost production.

Cars have become a must buy for China’s growing middle class, making them a key driver for the nation’s economy due to their high price tags.

The country’s vehicle sales totaled 25.3 million last year, down by a relatively mild 1.9%, as the market rebounded from a prolonged downturn that predated the Covid-19 pandemic. That compares with about 14.5 million vehicles sold last year in the U.S., the second largest market, which experienced a 15% decline as the country took a bigger hit from the global pandemic.

Xu said that car chips require large scale production to be profitable as their prices are relatively low. At the same time, strong demand for smartphones, PCs and other home-use devices has risen sharply over the past year as people spend more time at home, prompting chipmakers to shift their capacity to those sectors at the cost of car-use products.