By Peng Qinqing and Han Wei 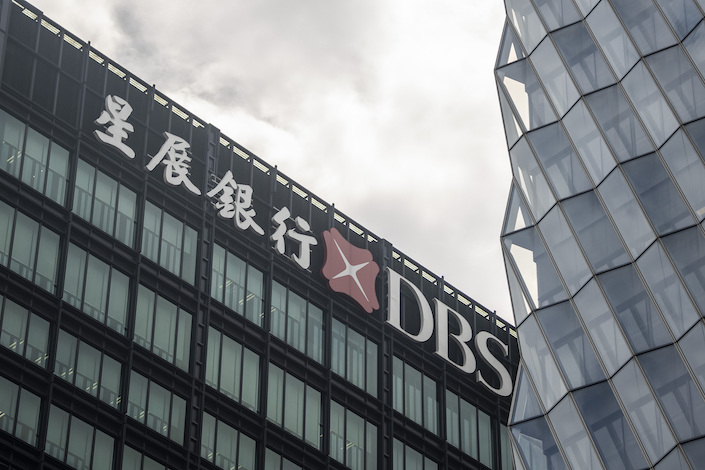 Entering China in 2007, DBS has opened 12 branches in Shanghai, Beijing, Shenzhen and other cities.

Singapore’s biggest bank, DBS, is putting its chips on China’s Greater Bay Area with the purchase of a 13% stake in Shenzhen Rural Commercial Bank Corp., marking the first foreign strategic investment in China’s small and medium-sized lenders through a private placement since 2010.

The Singaporean bank will become the largest shareholder of the Shenzhen rural lender after the deal, under which DBS will pay 5.29 billion yuan ($814 million) for 1.35 billion new shares of the privately owned commercial lender.

The offer represents 1.01 times the book value of the Shenzhen bank’s shares as of Dec. 31, DBS said. The deal was approved by the Monetary Authority of Singapore and the Shenzhen office of the China Banking and Insurance Regulatory Commission.

The investment sheds light on DBS’s ambition to expand its presence in China’s Greater Bay Area — a region covering part of Guangdong as well as Hong Kong and Macao. China’s central government has laid massive plans to promote regional integration in the bay area to create a new economic hub to rival Tokyo Bay in Japan or Silicon Valley in the U.S.

Proposed in 2009, the Greater Bay Area is home to 75 million people. It accounts for less than 1% of China’s territory but generates nearly 10% of national gross domestic product, or $1.7 trillion in 2019, about the same as South Korea or Russia.

“We see this as a highly complementary strategic partnership that will allow us to double down on the Greater Bay Area and leverage Shenzhen Rural Commercial Bank’s local network and know-how to deepen DBS’s strategy” in the region, Chief Executive Officer Piyush Gupta said in a stock exchange filing.

“At the same time, we would be able to support the continued growth and digital transformation of Shenzhen Rural Commercial Bank through our regional presence and digital capabilities,” Gupta said.

Established in 2005, Shenzhen Rural Commercial Bank runs one of the most extensive networks in the region with 210 branches in Shenzhen. As of the end of 2020, the bank had 519 billion yuan in total assets, making it one of the largest rural banks in Guangdong province. The bank reported 4.8 billion yuan in net profit in 2020. With more than 5 million active retail customers and more than 170,000 active corporate clients, the bank had 404 billion yuan of deposits at the end of last year.

Foreign banks halted steps to invest in smaller Chinese banks after the 2008 financial crisis, reflecting their own strategic changes and barriers to investing in China’s banking sector.

Although Chinese regulators in 2017 eased restrictions on foreign ownership of commercial banks, foreign banks remained cautious about expanding in the country. By the end of 2019, foreign banks’ total assets in China reached 3.48 trillion yuan, up 4.13% from the previous year.

In April, Citigroup Inc. exited retail banking in China along with 12 other countries as part of a global business overhaul. In 2017, Australia and New Zealand Banking Group Limited (ANZ) pared back its China assets by selling its holdings in Shanghai Rural Commercial Bank.

But as China steps up efforts to open its broader capital markets to foreign investors, global financial institutions have more options for tapping into the world’s second-largest economy, entering sectors including wealth management, securities brokerage and other businesses.

DBS said last month that it was looking to expand its presence in China and India as part of efforts to expand into the wider region.