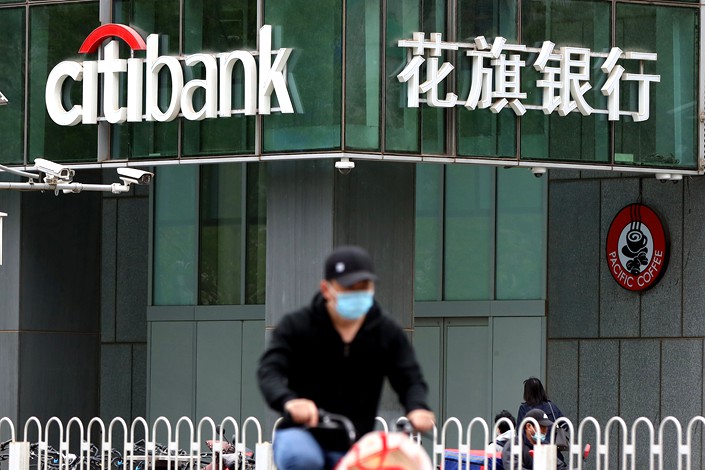 A Citibank branch in Beijing on April 16. Photo: VCG

U.S. banking giant Citigroup Inc. is closing its retail operations on the Chinese mainland as part of a broader withdrawal from consumer banking in 13 markets across Asia, Oceania, Europe and the Middle East, as it shifts its focus to wealth management and institutional business.

The New York-based bank will maintain a consumer banking presence in four “wealth centers” in Singapore, Hong Kong, the United Arab Emirates and London, it said in a statement released Thursday. The 13 markets are Australia, Bahrain, the Chinese mainland, India, Indonesia, South Korea, Malaysia, the Philippines, Poland, Russia, Taiwan, Thailand and Vietnam. The bank’s institutional business will not be affected.

Jane Fraser, who took over as Citigroup’s CEO in March, said the closures were part of a strategic review that would allow the bank “to direct investments and resources to the businesses where it has the greatest scale and growth potential.”

“While the other 13 markets have excellent businesses, we don’t have the scale we need to compete,” she said in a statement. “We believe our capital, investment dollars and other resources are better deployed against higher returning opportunities in wealth management and our institutional businesses in Asia.”

Citigroup has a relatively small consumer business on the Chinese mainland, with branches in 12 cities across the country, including Beijing, Shanghai, Shenzhen and Tianjin. The bank began operating in China when it opened its Shanghai office in 1902. In 2007, its wholly owned subsidiary Citibank (China) Co. Ltd. incorporated in the country. At the end of 2019, the value of the outstanding loans in its mainland business was 66.6 billion yuan ($10 billion), one third of which were personal loans, according to Citibank (China)’s annual report (link in Chinese) for that year.

The closure announcement “does not change Citi’s commitment to China, which remains critical to our strategy and our growth as a global firm and it has no impact on our institutional businesses in China,” Citibank (China) said in a separate statement.

“We are actively exploring new business opportunities here, including actively pursuing the set-up of a securities company and a futures company. … We will continue to assist Chinese clients to expand globally and foreign companies to tap into the vast opportunities in China in support of China’s dual circulation strategy,” it said.

China scrapped limits on foreign ownership of securities companies and futures companies in 2020 as part of a broader effort to open up its domestic financial sector to foreign players. The China Securities Regulatory Commission so far has approved eight foreign companies to either set up foreign-controlled securities firms or take controlling stakes in existing securities joint ventures. They include JPMorgan Chase & Co., Daiwa Securities Group Inc. and UBS Group AG.

Citigroup on Thursday also reported a strong earnings performance for the first quarter this year. Its net profits more than tripled to $7.9 billion from a year ago, driven by the lower cost of credit and strong institutional business. Revenue fell 7% to $19.3 billion.