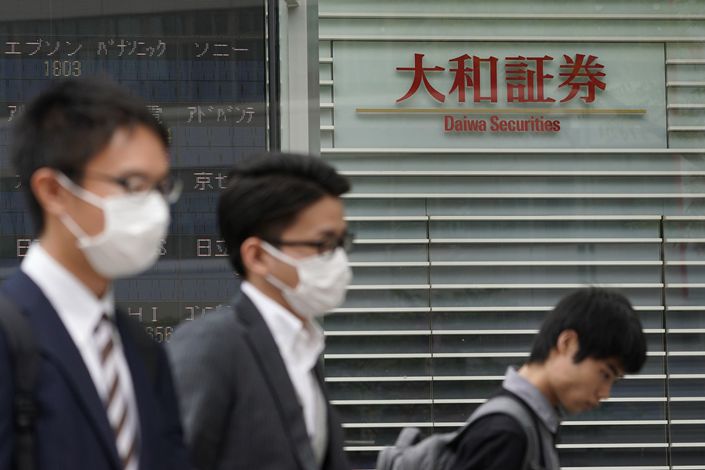 Pedestrians walk past the headquarters of Daiwa Securities in Tokyo on April 23.

One of the world’s largest securities firms, Daiwa Securities Group Inc., has won regulatory approval to set up a majority-owned joint venture on the Chinese mainland, the latest foreign company to take advantage of China’s financial opening.

The Japanese brokerage and investment bank will own 51% of the new venture, with the remaining stakes controlled by two Chinese state-owned companies based in Beijing, according to a statement (link in Chinese) by the China Securities Regulatory Commission (CSRC).

The venture will offer brokerage and securities underwriting services, with 1 billion yuan ($145.9 million) of registered capital, the statement said.

The venture’s chairman will likely be Michael Xian, a Daiwa Securities senior manager of Chinese nationality, sources with knowledge of the matter told Caixin.

For Daiwa, it is a comeback to the Chinese mainland, six years after leaving its 33.3% owned joint venture with brokerage Shanghai Securities Co. Ltd. due to managerial conflict among other reasons.

It is the seventh foreign company to take majority ownership of a securities joint venture on the mainland since the government began allowing them to do so. Last year, JPMorgan Chase & Co. and Nomura Holdings Inc. both received approval from the CSRC to set up new 51% owned securities ventures.

China’s policymakers have pledged to further open the country’s financial markets to global players over the past few years. Zhu Guangyao, then vice finance minister, announced a blueprint for opening-up in 2017, which included a pledge to loosen and eventually abolish limits on foreign institutions’ ownership of securities companies. China raised the cap on foreign ownership of securities joint ventures to 51% in 2018, before abolishing the cap (link in Chinese) this April.

In recent years, the limits on foreign ownership of futures firms, life insurance companies and banks have also been scrapped.