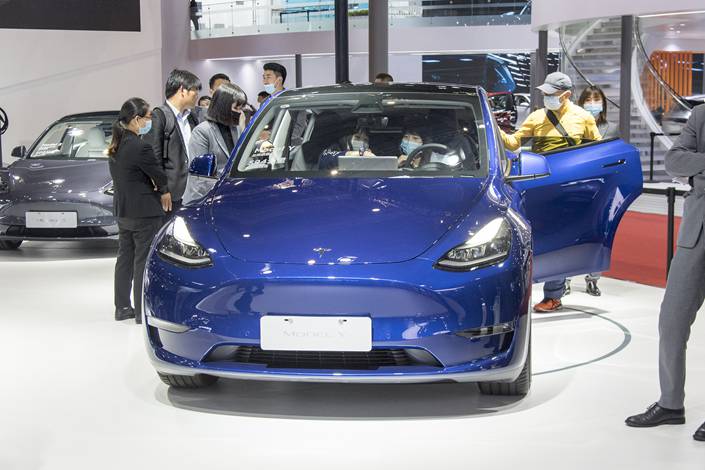 For the three months ended March, Tesla reported $10.39 billion in revenue, up 74% year over year, boosted by $518 million in regulatory credits and $101 million from selling the company’s bitcoin reserve.

In the quarter, Tesla delivered 184,800 cars, also a record for the EV-maker, thanks to strong demand from China for the Model Y produced in Shanghai.

However, the past three months have not all been good news for Tesla, with CEO Elon Musk saying the company had also suffered from the global chip shortage.

The disruption to the auto industry supply chain has led a string of vehicle manufacturers to interrupt production due to shortages of parts.

“Obviously, about the chip shortage, this is a huge problem,” Musk said at the Monday earnings call.

Tesla said it is navigating through the shortage by “pivoting extremely quickly to new microcontrollers, while simultaneously developing firmware for new chips made by new suppliers.” The company did not disclose the names of the new suppliers.

In addition to the chip shortage, Tesla is also facing production and reputational challenges in China.

Tesla CEO Musk said the company is having “quite a bit of difficulty” scaling up production in China because key engineers have not been able to travel to the country due to Covid-19 restrictions.

However, Tesla said it expects that the Shanghai factory “will continue to increase quarterly production output through the year.” Over 90% of the components are now sourced domestically in China, which cuts costs and improves production efficiencies, Tesla said.

China has delivered a big boost to growth for the U.S. EV-maker in the past year, but several recent safety investigations have clouded the company’s future in the country.

At the Shanghai auto show last week, a Chinese Tesla owner climbed onto a display vehicle, shouting that her car’s brakes had failed, leading to a crash in February. The incident was captured by scores of onlookers who uploaded the video to social media.

After initially pushing back against the woman’s claims, Tesla apologized to Chinese consumers for not addressing the complaints in a timely way.

Tesla’s troubles in China overlap with scrutiny in the U.S. over the safety of the company’s partially automated driving system. This month two people were killed in Houston in a Tesla Model S that hit a tree with no one apparently behind the wheel, local authorities said.

Asked about safety, Musk said Tesla’s camera-based driving assistance system is safe and was not the cause of the crash in Houston. “We can make a car that is dramatically safer than the average person,” he added.

Tesla shares dipped as much as 3% during after-hours Monday.