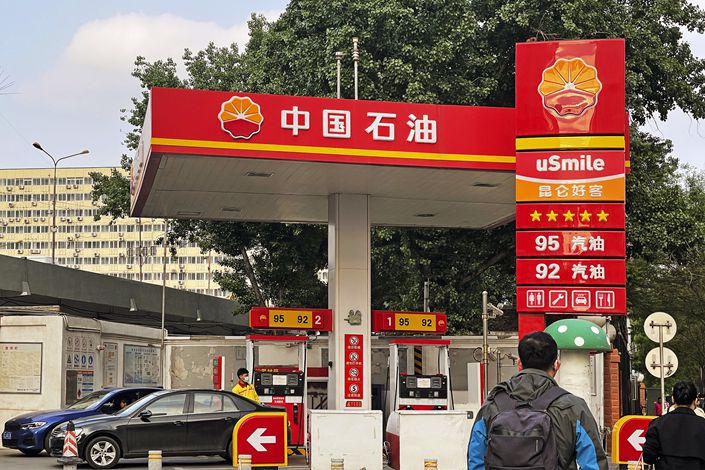 A PetroChina gas station in Beijing on April 22. Photo: VCG

PetroChina Co. Ltd. (601857.SH) announced a swing back to profit in the first quarter from a loss the same time a year ago as the country’s state-backed oil and gas firms reap the rewards of the Asian giant’s rapid recovery from the economic shock of the Covid-19 pandemic.

The energy titan posted a profit of 27.7 billion yuan ($4.3 billion) in the first three months of 2021, overturning a 16.2 billion yuan loss last year when the coronavirus crisis triggered production shutdowns and a prolonged demand slump. Revenue hit 552 billion yuan, up 8.4% on last year but down 6.6% on the first quarter of 2019.

The company —which has shares traded in New York, Hong Kong and Shanghai — attributed its strong performance to China’s fast economic rebound, resurgent global oil prices and increased operational efficiency, according to an earnings report filed to the Hong Kong Stock Exchange.

In a separate filing, PetroChina, which is the publicly traded arm of state-owned China National Petroleum Corp. (CNPC), said it plans to team up with its parent company and another of its subsidiaries to set up a new industry investment firm focusing on clean energy.

Rising pent-up demand will, in turn, feed into rising “organic demand” for refined products like gasoline, diesel and jet fuel, said Fenglei Shi, an associate director at the consultancy.

Rising prices have also helped to swell the major companies’ coffers. Spot prices of Brent crude averaged around $61 per barrel in the first quarter, up by one-fifth year-on-year, while prices for natural gas have largely returned to pre-pandemic levels.

Those factors were on display yesterday when PetroChina’s domestic rival Sinopec booked a net profit of 17.9 billion yuan in the three months through March, reversing a loss of nearly 2 billion yuan in the equivalent period last year and marking a rise of 22% on 2019.

PetroChina’s first-quarter net profit, meanwhile, was a whopping 170% higher than two years ago. Its gas and pipeline interests delivered profits of 18.5 billion yuan, more than any other part of the business, bolstered by a nearly 30% year-on-year rise in the company’s average sale price for gas.

Oil refining and chemicals were the second-largest contributor to PetroChina’s first-quarter profit, accounting for 14.7 billion yuan compared with an 8.7 billion-yuan loss last year.

PetroChina is pivoting farther toward natural gas as part of its strategy to bring its carbon dioxide emissions to a peak by the middle of the decade and force them to net zero by 2050, earlier than China’s national emissions goals.

The company said last month that gas will account for about 55% of its portfolio by 2025, up from 43% last year. Burning natural gas to generate electricity produces less planet-warming carbon dioxide than other fossil fuels like coal and oil, and is widely seen as a way to reduce emissions during the transition toward clean energy.

An executive said during a Friday earnings call that the firm is also formulating more-detailed plans for cutting emissions and will look to expand the use of technologies that suck carbon dioxide out of the air.

In a further effort to burnish its green credentials, PetroChina said Thursday that it planned to partner with CNPC and its Shenzhen-listed financial services subsidiary, CNPC Capital Co. Ltd. (000617.SZ), to establish a new investment firm that would specialize in “strategic emerging industries” that would bolster PetroChina’s “green low-carbon strategy.”

The new firm, provisionally named CNPC Kunlun Capital Co. Ltd., would have registered capital of 10 billion yuan, according to the filing. CNPC would own 51% of the venture, while PetroChina would own 29% and CNPC Capital would have the remaining 20% stake.