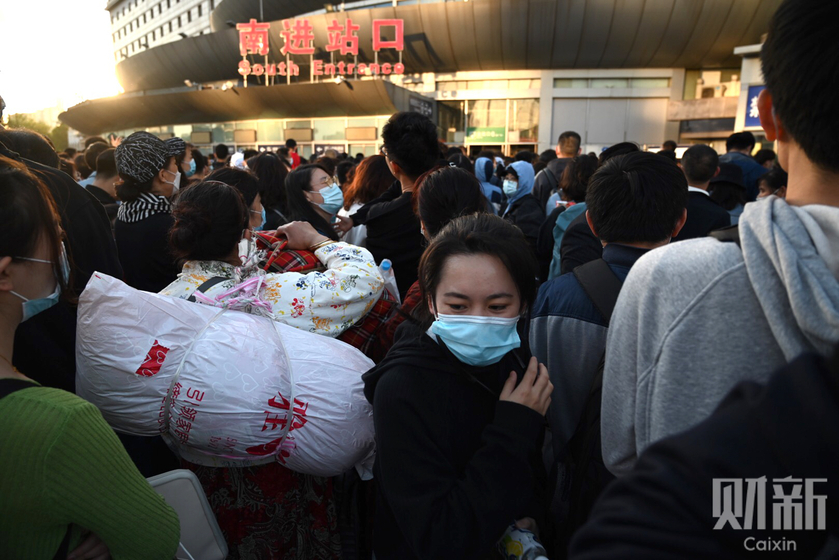 Sixteen high speed trains were cancelled on Saturday, and a further eight on Sunday, according to the station operator. Photo: Cai Yingli/Caixin

On Saturday — the first day of a national holiday that runs until May 5 — more than 30 high speed railway trains from Beijing to Wuhan, Xi’an, Changsha and further afield were delayed, and a further 16 cancelled.

The culprit was strong winds in Dingzhou, a city in Beijing’s bordering Hebei province, which led to a power failure that caused “various delays” on the Beijing-Guangzhou high-speed railway — a vital route spans China’s east coast — the Beijing West Railway Station operator said in a short Weibo post (link in Chinese) around lunchtime Saturday.

But even as the operator blamed freak winds, passengers on site were blaming the operator’s poor planning and management for compounding the crisis. Beijing West is run by a local subsidiary of China State Railway Group Co. Ltd. (CR).

“For many people, the Labor Day holiday ended at the Beijing West Station,” said one popular post on Weibo.

The operator apologized (link in Chinese) on Sunday in a Weibo post, saying that it would investigate the incident and figure out a better emergency plan for future use. Passengers whose trains were cancelled would be entitled to full refunds within 30 days. It was unclear how those otherwise affected would be treated, given Chinese railway law does not enshrine compensation for travel delays.

China was expected to record 18.83 million passenger trips on Saturday, up 9.2% from the pre-pandemic May holiday period in 2019, according to a report from the official Xinhua news agency citing CR.

Beijing West issued new guidelines in 2018 saying it would improve its communication, set up specific counters for ticket returns or adjustments, simplify its procedures and improve crowd management.

Observers said the holiday crisis shows the guidelines were poorly implemented, particularly in the lack of information provided to passengers. Many of those at Beijing West had not received timely delay alerts via text, or their ticket-purchasing platforms, Caixin found.

Some told Caixin that the information provided on the official railway app, “12306,” was not up-to-date. Even billboards and train broadcast announcements did not provide timely information, they said. Instead, they were forced to rely on bullhorns grasped by station staff, which were hard to hear at a distance.

Normal operations at the station had resumed on Monday.