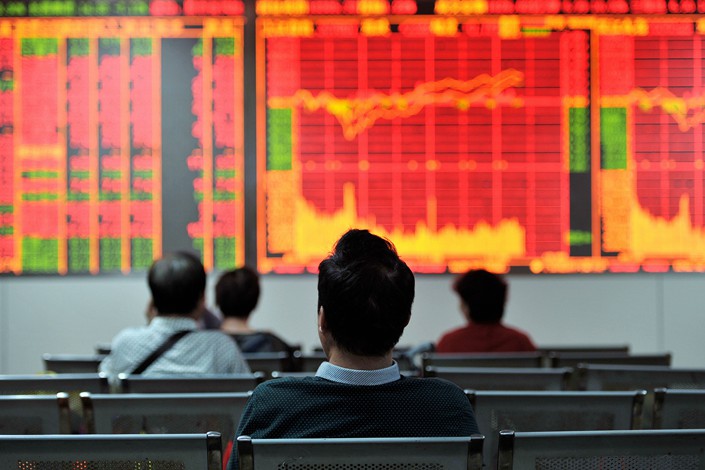 (Bloomberg) — For China’s equity investors, a bullish outlook for corporate earnings hasn’t been enough to boost sentiment in a market still weighed by liquidity concerns.

The CSI 300 Index has been stuck in a narrow range for weeks, and investors stayed cautious heading into the Labor Day break that runs through May 5. A measure of turnover is near its lowest in nearly six months.

It’s a far cry from the scorching rally that drove the CSI 300 Index to its highest level since 2007 ahead of the previous national holiday in February. The benchmark gauge is down 12% since then, having notched up its worst performance against global peers since 2016 in March.

Valuations are still relatively expensive. Optimism about China’s economic recovery from the pandemic was priced in long ago and has been replaced by concerns over monetary tightening and a government campaign to cut leverage. Investors have been rattled by moves to regulate the nation’s internet giants, a record wave of corporate bond defaults and persistent worries over the financial health of firms such as China Huarong Asset Management Co.

“No one knew the sentiment would turn so drastically after the Lunar New Year holiday. Into this long weekend, I’m cautious partly because of the policy uncertainties,” said Jackson Wong, an asset management director at Amber Hill Capital Ltd. “The market is going to be stuck in a narrow range until there is strong signal to sell or to buy.”

Here’s a snapshot of what investors are focused on as they look ahead into May:

Analysts have largely upheld bullish profit forecasts on the biggest Chinese companies with most firms having reported first-quarter results. Average earnings per share expectations for CSI 300 Index firms are at a record high, according to data compiled by Bloomberg.

The CSI 300 Index members’ earnings grew by 27% from a year in the first quarter, the fastest first-quarter pace since 2010, according to data compiled by Bloomberg. Yet shares have not moved dramatically, while investors rushed to sell stocks that that missed analyst expectations. Kweichow Moutai Co., the biggest mainland-traded stock, has lost 4.2% since releasing quarterly earnings on Tuesday.

The CSI 300 Index remains stuck in a narrow trading band between its 100-day and 200-day moving averages. Meanwhile the Shanghai Composite Index has been capped by its resistance at 3,500 points, forming an ascending triangle which could be indicative of future bullish breakthrough.

Equity traders have struggled to come to terms with plans by Chinese policy makers to gradually wind-back pandemic-fueled stimulus. The government has revived a campaign to cut leverage that was shelved amid the trade war with the U.S., and has moved to limit the impact of “hot money.”

However, China’s top leaders see the current economic recovery as “unstable” and have pledged to keep macro policies consistent to boost a recovery in manufacturing and private investment, state-run Xinhua News Agency reported on Friday, citing a meeting of the Communist Party’s Politburo chaired by President Xi Jinping.

The meeting reinforced that policy stability will remain in the coming months, Citigroup Inc. analysts wrote in a note on Sunday. “The statements were meant to dispel recent market worries about hasty tightening,” analysts including Xiangrong Yu said.