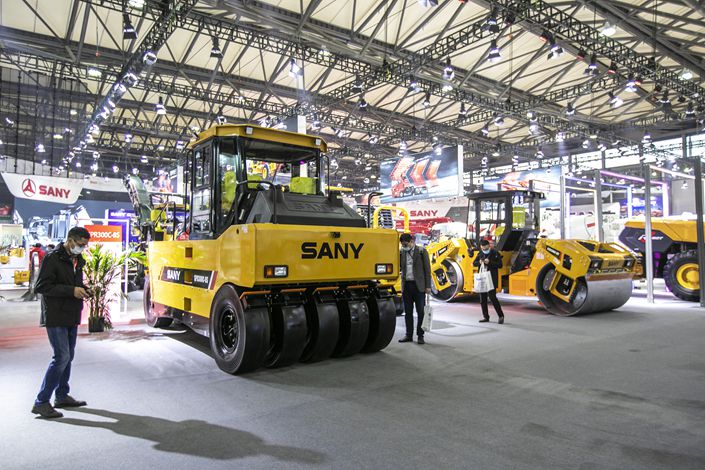 Two of China’s major construction-equipment makers reported a significant growth in revenue and net profits in the first quarter of this year, benefitting from major government infrastructure spending in the wake of the Covid-19 epidemic.

Meanwhile, Shenzhen-listed Zoomlion Heavy Industry Science and Technology Co. Ltd. (000157.SZ) recorded a 135.4% year-on-year jump to 2.4 billion yuan in net profit in the first quarter of this year, according to its latest report (link in Chinese).

Excavator sales are often seen as a leading indicator of investment as the equipment is widely used in construction from roads to housing. The country’s 26 leading machinery-makers sold a total of 79,000 excavators in March, up 60% year-on-year, data from China Construction Machinery Association showed. In the first three months of this year, these companies sold a total of 126,900 excavators, up 85% year-on-year.

A research report released on April 9 by Zhongtai Securities Co. Ltd. showed that since January, more than 10 cities have started construction on major projects with investment of over 1.6 trillion yuan combined. In the first quarter of this year, the country’s infrastructure investment surged 29.7% year-on-year, according to data (link in Chinese) from the National Bureau of Statistics released on April 16.

The CICC Excavator Utilization Index, developed by China International Capital Corp. Ltd. (CICC) to track the usage of excavators, in March climbed up by 2.6% from the high base in the same period last year, bolstered by the stable demand from the property and construction sectors, analysts from CICC said in a report (link in Chinese) earlier this month.

In the 2021 government work report released in March, the central government pledged to earmark a total of 610 billion yuan for investment in its budget to support the idea of “two new and one major,” meaning the construction of new infrastructure, new urbanization projects and major transportation and water projects.