Blog: Who Owns Your Tesla’s Data? 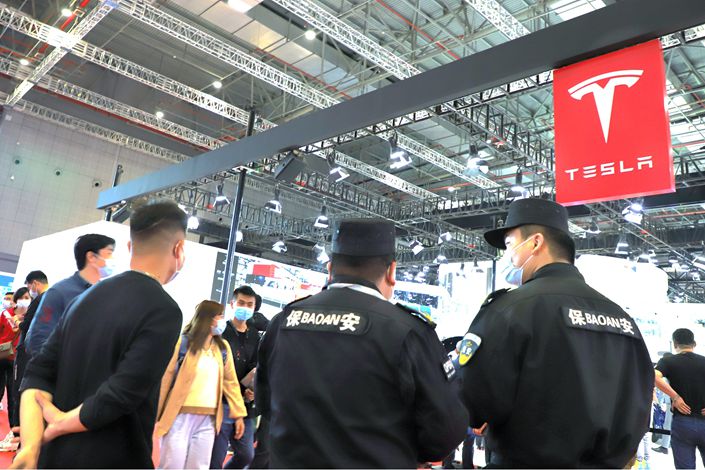 A view of Tesla's car booth at the 19th Shanghai International Auto Show in Shanghai on April 27. Photo: VCG

At the Tesla booth at the 2021 Shanghai International Automobile Industry Exhibition, a car owner climbed atop a Tesla car to voice accusations of brake failure. The woman was subsequently handed the punishment of five-day administrative detention for disturbing public order. The incident has stirred heated public debate.

Regulatory authorities joined the fray, requesting data from Tesla on the vehicle involved in the woman’s accident. Tesla complied.

On April 22, Tesla disclosed the vehicle’s driving data during the minute prior to the accident to the media, with a written explanation attached. The car owner’s husband later issued a response, saying that he planned to file a complaint because, he believed, the data disclosure by Tesla had infringed upon the personal privacy and consumer rights and interests of his wife.

Some experts have already weighed in on the data provided by Tesla. One of the main conclusions they’ve reached is that leading up to the accident, the driver had been driving at a high speed, then braked abruptly a number of times, but failed to stop the car. To prove the credibility of its data, Tesla explained that it was taken from the automotive gateway, which reads signals coming from different parts of the vehicle and stores it using encryption techniques, ensuring that the data cannot be read, modified or deleted directly.

The debate on the privacy infringement has gradually come down to the core issue of “data ownership.” In this case, only Tesla has access to the data. This is advantageous to Tesla in the case of either a lawsuit or public debate. After all, data speak louder than words. Moreover, even if data is made public, a third party would have no access to the technical information needed to make sense of it. Interpretation of the data would still depend on Tesla’s assistance. Therefore, Tesla looks like both the player and the referee — and the game is one of life and death.

Should Tesla have such control over the final decision-making?

I personally believe that, from a legal perspective, the ownership of vehicle data should be shared by both Tesla and the owner of the vehicle, rather than being monopolized by the company.

Furthermore, the vehicle owner, regulators and judicial departments should all be entitled to use the data within the scope of their respective authority, and Tesla should be obligated to cooperate by providing data and corresponding interpretations. Of course, all sides must uphold confidentiality and refrain from using the data for other purposes, as any data leak could potentially expose Tesla’s trade secrets. Still, all these issues should ultimately be addressed through legislation, with provisions on data ownership, retrieval procedures, confidentiality obligations, data interpretation and so on.

But the issues involved truly touch on the common interests of all Tesla customers in terms of vehicle design and user behavior. In this regard, the public has the right to be fully informed. Moreover, in light of the rather tenuous connection between vehicle data and the personal information and privacy of its driver — as well as the value of releasing such data to the public as evidence — the consumers in such cases should surrender a bit of their privacy for the greater good. Tesla’s public release of the vehicle data is in the best interests of everyone. Data during the one minute prior to the accident reveal the actions of the driver. Such information is necessary for accident investigation. And as this involves no invasion of privacy, its publication should be allowed. Just imagine if Tesla had decided to withhold the data. The media would have a field day.

When public interest collides with personal privacy, we have to strike a balance.

For example, in the case of the Covid-19 outbreak, disclosure of personal information of the infected people should follow the principle of necessity — only revealing their whereabouts over particular timeframes; offering any more personal information would infringe on a patient’s privacy.

However, the vehicle data involved in this case, which are indispensable to investigation of the accident, are not sensitive or reveal personal information, and therefore irrelevant to question of privacy infringement.

For the sake of our safety, we expect the authorities to thoroughly investigate “brakegate” and identify the root cause of past accidents — whether the fault lies in vehicle design or manner of driving — and make provisions related to the use of data in potential future accidents.