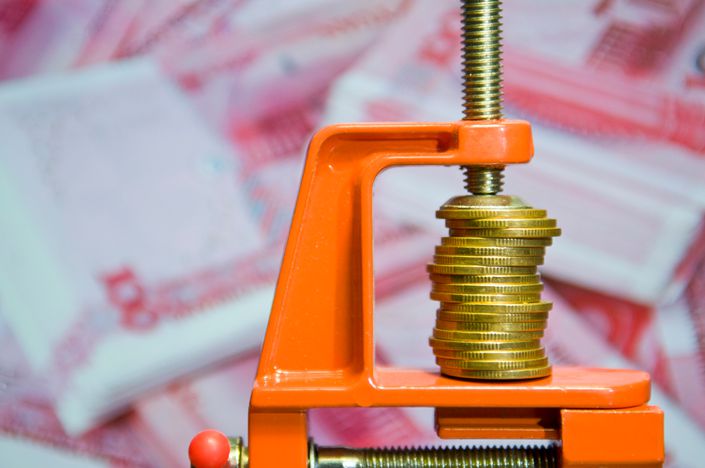 Hidden local government debt generally refers to borrowing that violates laws and regulations or that has been disguised. Photo: VCG

China’s 14th Five-Year Plan (FYP) covering 2021-2025 will be a critical period for resolving the hidden risks of local government debt, judging by the signals emanating recently from the central government.

The plan and the long-term targets for 2035 (published in March during the annual meeting of the National People’s Congress) stress (link in Chinese) “steadily and prudently defusing hidden local governments’ debt” and “severely punishing debt evasion.” Subsequently, on April 15, Vice Premier Han Zheng said that the increase in hidden local government debt must be “resolutely curbed,” the stock of debt should be steadily resolved, and local government debt risks must be prevented and resolved. Han made the comments at a seminar (link in Chinese) for provincial and ministerial cadres on the establishment of a modern fiscal, tax and financial system. In the same month, the State Council outlined detailed suggestions for preventing and resolving the hidden debt of local governments in a document titled “Opinions on Further Deepening Reform of the Budget Management System.” Two articles published recently in the People’s Daily by Finance Minister Liu Kun also specifically emphasized the need to mitigate the risks of hidden local government debt.

The hidden debt of local governments generally refers to local government borrowing that violates laws and regulations or that has been disguised. The problem stems from the updated Budget Law implemented in 2015 that gave the State Council the power to set the level of debt that lower levels of government can take on. Local governments need or want to invest in projects that require long-term spending, but the amount they are legally able to borrow under the debt quotas are unable to meet their funding needs so they are forced to circumvent the restrictions of the budget law. Before the updated law went into effect, local government financing vehicles were the main source of this funding, but the methods of raising funds have now become more hidden and more diverse. Academic research to identify the scale of this hidden debt has put forward estimates ranging from 20 trillion yuan ($3 trillion) to 40 trillion yuan.

China had already started addressing the issue of hidden local government debt during the 13th FYP period (from 2016 to 2020) when its efforts mainly focused on estimating and monitoring the scale of the debt and trying to resolve the risks in some cities which had caused widespread concern, such as Zhenjiang in Jiangsu province.

In Depth: The Local Government Debt Crisis That Just Won’t Go Away (Part 2)

Recent statements by leaders of the State Council and the Ministry of Finance, and government documents make it clear that the 14th FYP period will be a critical time to defuse the risks stemming from hidden local government debt. The State Council laid out its strategy for mitigating the risks in the April document: first, prevent illegal debt by “resolutely curbing” the growth of hidden debt, maintain “high-pressure” supervision, set out red lines for hidden debt and punish those responsible for illegal borrowing activities; second, the central government should guide and urge local governments to establish a rule-of-law and market-oriented mechanism to deal with debt defaults, and actively and prudently deal with the stock of hidden debt. Finance Minister Liu also proposed that provincial-level governments take responsibility for dealing with local debt risks, indicating the governments will play a major role in the prevention and resolution of risks.

On a general level, the central government has taken a very tough stance with regard to curbing the growth of hidden debt; it has pledged to steadily and prudently resolve the stock of hidden debt, but it has yet to put forward any specific measures.

The emergence of hidden local debt reflects to some extent the inherent contradictions in China’s economic structure and even its national economic governance system. There are three dimensions of risk stemming from implicit local debt — the first from incremental debt, the second from the stock of debt and the third from the dynamic interaction between the central and local governments. (See Editor’s Note below.)

Policies that are conducive to solving/tackling risks in one dimension may increase risks in another dimension. Therefore, any plan to resolve the hidden debts of local governments requires its impact on these three dimensions of risk to be comprehensively weighed up.

In the short term, to resolve the risks stemming from the excessively high cost of the stock of debt and its potentially poor liquidity, one idea worth considering is a debt swap mechanism. That would ensure the responsibility for the debt is still borne by the local government and would only be allowed if the local government makes a commitment to achieve transparency in its investment and debts, and formulates a long-term debt repayment plan.

Editor’s Note: Wang explained the three dimensions of risk in an article (link in Chinese) published in May 2020.

The risk stemming from incremental debt refers to local governments’ limited sources of fundraising for investment in infrastructure projects, which has forced them to turn to illegal methods of borrowing to fill the funding gap.

The risk from the stock of debt refers to the pressure on local governments over repayments of the principal and interest on their implicit debt, which is mainly taken on by local government financing vehicles (LGFVs). In general, the cost of servicing the debt is high because LGFVs have to pay higher interest rates on their borrowings due to the perceived risks. But the return on LGFV assets has been declining, indicating deteriorating profitability. If market liquidity tightens and that results in LGFVs being unable to refinance their debt, this could trigger a credit risk event that could seriously impact the financial market.

The risk associated with the dynamic interaction between central and local government relates to the moral hazard that arises as a result of the assumption by local officials that the central government will eventually step in and bail them out. This assumption will lead some local governments to continue borrowing heavily.

Wang Dehua is a research fellow with the National Academy of Economic Strategy under the Chinese Academy of Social Sciences.