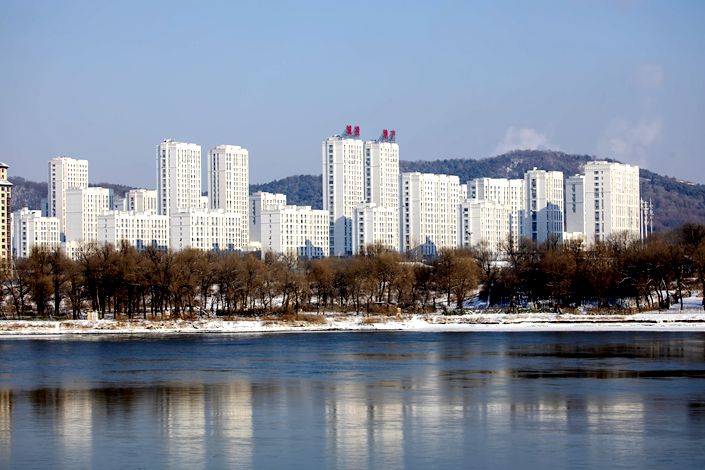 As the government battled last year to reboot an economy pummeled by the Covid-19 epidemic, it opened the debt spigot and put on the back burner its long-standing commitment to tackling the mountains of debt and hidden financial risks accumulated by local authorities from years of investment spending.

But now, with the recovery on solid ground and GDP growth expected to rebound to at least 6% this year, dealing with record local government borrowing is firmly back in policymakers’ crosshairs as they refocus on long-term priorities. The emphasis this year is on defusing the risks attached to implicit debt, the liabilities hidden off local government balance sheets mostly in special-purpose financing vehicles, as well as lowering the growth of new borrowings rather than cutting the debt itself however.

The message was repeated by the National Development and Reform Commission (NDRC), the nation’s powerful economic planning agency, in its work report. “We will strictly enforce regulations on the prevention and control of local government debt risks, firmly check increases in hidden local government debt, and take proactive and prudent steps to address existing hidden debts,” it said.

This year, the quota for the issuance of local government special-purpose bonds, bonds that fund commercially viable investment and which are meant to be repaid with income generated by the projects they invest in, has been cut by 100 billion yuan ($15.4 billion) to 3.65 trillion yuan, the first reduction since the debt instrument was introduced in 2015. The ministry’s budget report said the cut was “conducive to forestalling risks related to local governments’ legally prescribed debts” and it pledged to “prohibit local governments from indiscriminately running up debts to launch new projects.”

The overall general budget deficit for local governments has been set at 820 billion yuan which will be financed through the sale of local general-purpose bonds. The deficit is 16.3% lower than the record 980 billion yuan gap in 2020 and the lowest since 2016’s budget, although the central government said it will make a “slight increase” in transfer payments to localities to 8.34 trillion yuan.

Local government debt has ballooned in spite of the top leadership’s pledges to rein in liabilities as part of the broader campaign to deleverage the economy. That’s partly because the central authorities shifted their focus to supporting slowing growth at the end of 2018 and called on local governments to increase spending. The borrowing taps were opened further in 2020 to help the economy recover from the coronavirus pandemic.

In addition to the rising explicit liabilities of local authorities, implicit debt and the risks stemming from it have also grown, according to a report (link in Chinese) released in January by a forum backed by Renmin University of China and a credit ratings agency. Implicit debt refers to the trillions of yuan of borrowings held off the books through local government financing vehicles (LGFVs), public-private partnership projects, shady loan contracts and other channels. As the central government’s focus returns to tackling local government finances, some heavily indebted regions will face growing pressure as it becomes more difficult for LGFVs and other relevant entities to repay their debts.

The authorities have been attempting to rein in local government debt and tackle the hidden liabilities and risks attached to them since 2014, after a report by the National Audit Office (NAO) estimated the total debt had surged to 17.9 trillion yuan by June 2013 from 10.7 trillion yuan at the end of 2010. Much of the borrowing was hidden off the balance sheets of local authorities in LGFVs, companies set up specifically to borrow the money needed to fund trillions of yuan of spending on infrastructure and public welfare projects, many of which are not commercially viable and have low returns.

Concerned about the potential risks to the financial system, the central authorities set about cleaning up the debt — making it more transparent and bringing hidden liabilities back onto local government balance sheets as explicit debt by lifting a long-standing ban on municipal bond sales.

The NAO hasn’t released a full update to its 2013 report and there have been no official estimates of hidden local government debt since then, although in November 2018, the People’s Bank of China (PBOC) said in its annual Financial Stability Report (link in Chinese) that hidden debt in one unnamed province was 80% higher than its explicit debt by the end of 2017. The PBOC didn’t provide any updates in its 2019 and 2020 reports, although it stressed the importance of dealing with hidden debt.

But some financial institutions have made their own estimates. A report (link in Chinese) by Bank of China Ltd. in June said that the hidden debt of local governments likely amounted to 49.3 trillion yuan at the end of 2019, equivalent to nearly half of China’s GDP in 2019. S&P Global estimated off-balance-sheet debt at 30 trillion yuan to 40 trillion yuan, according to a report in October 2018.

The government’s continued concern over the scale of local government debt and the risks it poses to financial stability is evident in the comments made in this year’s work reports of Premier Li Keqiang, the Ministry of Finance and the NDRC.

They appear to acknowledge the limited success of the campaign to rein in off-balance-sheet liabilities and defuse the associated financial risks. The main plank of that campaign was a debt-swap program that ran from mid-2015 to late 2018 to cut local authorities’ financing costs, reduce their exposure to interest-rate volatility, and make liabilities more transparent by putting them back onto the governments’ balance sheets.

Although the debt-swap program officially ended in 2018, it has continued on an ad-hoc basis. In 2019, local authorities in seven provincial-level regions were allowed to issue 158.8 billion yuan of debt conversion bonds, analysts at Huachuang Securities Co. Ltd. wrote in a research note in January. Another batch of swaps may have been given the go-ahead since December 2020 through the sale of refinancing bonds (再融资债券) which are meant to be used to refinance maturing explicit debt, the Huachuang Securities analysts said.

From Dec. 1 to Jan. 24, filings by local authorities in Beijing, Tianjin and 21 other provincial-level regions indicated that 63 refinancing bonds raising a total of 457.3 billion yuan were being used to repay debt rather than refinance maturing bonds, the analysts said, citing figures from data provider Wind Information Co. Ltd. They speculated that some of the proceeds were in fact going to be used to repay hidden debt.

The finance ministry is looking carefully at applications, the Huachuang analysts said. Local authorities need to go through several rounds of examinations and fully explain to the central government what their off-balance-sheet debt was used for before getting approval to conduct the swaps, they wrote.

The swaps are positive because they help put the risks of off-balance-sheet liabilities under control, the analysts said. They also allow local governments to extend the maturity of the debt and strengthen the local governments’ capability to withstand short-term risks, they said. But debt-ridden provinces such as Heilongjiang and Hunan have limited room to conduct bond swaps as the explicit debt that’s in their budgets is already close to the cap set by the Ministry of Finance, they said.

Some analysts say China is unlikely to ramp up the swap program further as it would lead to an increase in local governments’ explicit debt, which could dent market confidence and exacerbate the moral hazard of local governments continuing to pile up debt through unchecked and risky off-balance-sheet financing.

The finance ministry is also considering measures to reduce financial risks among LGFVs by linking their ability to sell bonds with the amount of debt on the books of the local government that controls them, several sources close to financial regulators told Caixin in January. The rules will first be rolled out in China’s two stock exchanges, where LGFV bond sales are relatively low, and may subsequently be imposed in the interbank bond market which accounts for about 90% of bond trading on the Chinese mainland, the sources said.

LGFVs will be categorized based on a four-tier traffic-light system set up by the finance ministry to assess the risks of each local government. According to market speculation, a green label, awarded if the parent local government has total explicit debt of less than 120% of its comprehensive financial resources –– mainly on-budget fiscal revenue, transfer payments from the central government, land sales and some off-budget revenue –– means an LGFV won’t face any restrictions on bond sales, while a red tag, which denotes the debt ratio exceeds 300%, will incur a ban. However, sources close to the regulators have told Caixin that a red categorization will not lead to a total ban and that bond sales to repay maturing debt will be permitted.

Zhao Quanhou, director of the financial research center of the Chinese Academy of Fiscal Sciences, a think tank associated with the Ministry of Finance, said he believes it is reasonable to appropriately restrict the issuance of bonds by LGFVs where local governments have high debt risks. However, implementation must take into account the reality on the ground. If the credit situation of LFGVs deteriorates to the extent that they require large-scale government bailouts, the authorities will need to relax the restrictions, he told Caixin.

The Covid-19 outbreak has also thrown up new challenges for efforts to tackle hidden liabilities, said Zhao. The value of some local government assets has been significantly affected by the epidemic and they can’t now be sold at the prices originally anticipated, he said. The original solution of converting implicit debt into bonds also needs to be adjusted, he said. Some local governments had planned to inject tourism assets into LGFVs to offset their debts but the tourist sector has taken a heavy blow from the epidemic and tourism revenue has plummeted, so they will have to rethink their plans, Zhao said.