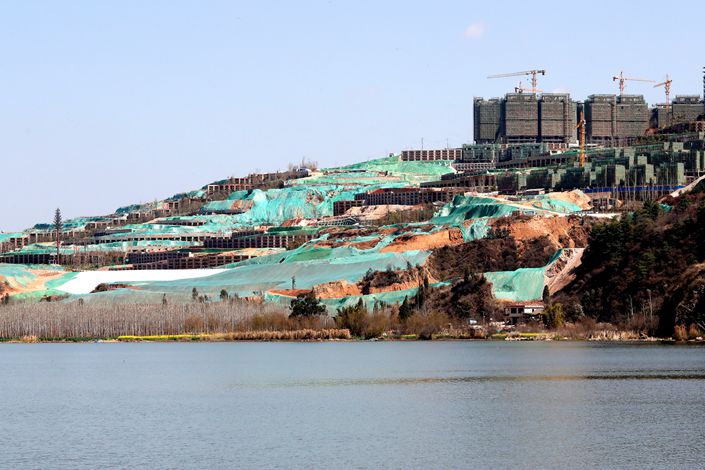 A real estate project under construction along the bank of Dianchi Lake in Kunming, Yunnan province, on Feb. 12. Photo: VCG

China’s top environmental watchdog has found a string of violations during its latest round of inspections, including illegal mining, excessive development and illicit trash incineration, illustrating the country’s perennial struggle to crack down on ecological abuses.

The Chinese capital pledged to further address its environmental problems under the latest 14th Five-Year Plan, but it remains under pressure to maintain blue skies and prevent heavy pollution. Beijing was enveloped in sand and dust on Thursday during the sixth sandstorm of this year, coinciding with the disclosure.

The Ministry of Ecology and Environment (MEE) on Thursday reported (link in Chinese) eight cases in which enterprises and local officials failed to ensure environmental compliance and caused long-lasting pollution. They were found guilty of misconduct such as inaction and fraud.

A month earlier, the MEE sent out teams of inspectors to eight provinces and regions as part of the ongoing second round of inspections that focus on state-owned enterprises and government ministries, according to a report (link in Chinese) published by the MEE.

More than 2,200 people who had failed to comply with environmental laws were detained in the first round of inspections, with hundreds held to account, according to the report.

The Thursday report reveals that in the northern province of Henan, the former builder of the Taiyuan–Jiaozuo high speed railway illegally quarried (link in Chinese) about 1.56 million tons of stone between September 2019 and January 2020 from a mountain, destroying forests and leaving “a large number of steep slopes.”

In another case, authorities in a city in South China’s Guangxi Zhuang autonomous region failed to carry out a rectification (link in Chinese) required by inspectors during the last round of inspections, with more than 100 million tons of soil and stone discarded randomly in the mountains and gullies over the past 30 years.

Inspectors in the southwestern province of Yunnan found that real estate developer Kunming Nuoshida Enterprise Group Co. Ltd. illicitly built more than 1,000 houses in protected mountain area in the name of a healthy housing project (link in Chinese) for retired people, a kind of project allowed there by the government, causing the Changyao mountain to “basically lose” its ecological functions.

In the central province of Hunan, officials failed to build two waste incineration power generation projects (link in Chinese) as planned, causing serious secondary pollution, especially in Jishou city and Yongshun county, both of which should have finished the construction of the projects and put them into use by 2019 but have not done yet.