Fanuc Regains Earnings Muscle Despite Burden of Past Investments 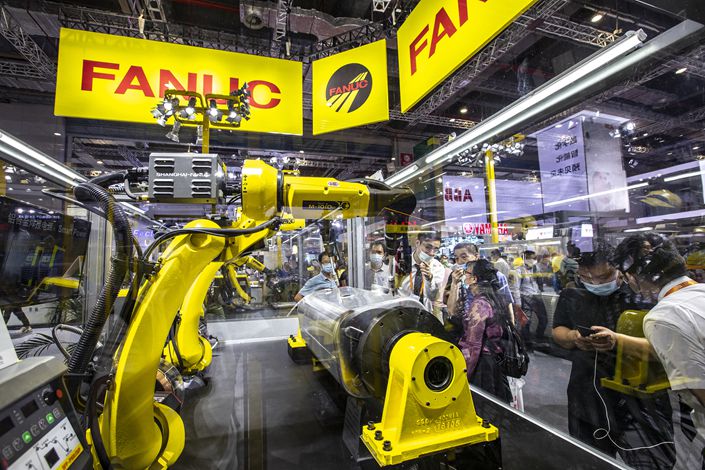 (Nikkei Asia) — Industrial robot maker Fanuc enjoyed an uptick in earnings last fiscal year, but it has yet to regain its highs from last decade as investments — primarily in robots to make its robots — aimed at tapping Chinese growth have failed to pay for themselves as quickly as hoped.

The manufacturer logged its first net profit growth in three years for the fiscal year ended in March, with a 28% jump to 94 billion yen ($866 million), amid growing demand for industrial robots. Its operating profit margin returned to double digits at 20.4%, outpacing rivals Yaskawa Electric and ABB, thanks to a strong focus on automation and a pared-down product lineup.

But both net profit and operating margins are down by roughly half from their fiscal 2014 peak. While Fanuc reaped the benefits of a factory automation boom that year, it is now grappling with a Chinese economy that has cooled amid trade tensions with the U.S. and the coronavirus outbreak.

But the decline is not only because of external factors. Heavy upfront investment is weighing on earnings as well.

Fanuc invested an average of about 100 billion yen — or more than $900 million — annually over the five years through fiscal 2019, mainly in robots at home, roughly doubling its robot output capacity.

As a result, depreciation and amortization costs in fiscal 2020 totaled about 8.1% of sales. This is up from 2.9% in fiscal 2014 — reflecting increased expenses as well as a drop in income — and significantly higher than equivalent figures at Yaskawa and ABB. An analyst expressed concern about the impact of expansion-related fixed costs in an earnings briefing last month.

These indicators suggest that Fanuc's drive to add capacity has not been effective at generating returns.

This is partly because China, the world's largest market, tends to heat up and cool down rapidly. Local contract smartphone makers and other manufacturers tend to order more robots than they really need in order to secure capacity. Fanuc, intent on chasing market share, poured money into production to meet demand that proved to be temporary, while real demand may not have grown as much as expected.

There are similar concerns about its current recovery. The company logged its second-highest quarterly order total ever in the first quarter of 2021, but President Kenji Yamaguchi warned of "risks associated with advance orders for China."

And the company cannot afford to wait for depreciation to run its course and China's economic growth to rev up. Competition is intensifying as rivals step up investment in anticipation of stronger demand. Yaskawa plans to bring a new parts production facility online in fiscal 2022, while ABB is set to complete a plant in Shanghai this year.

Local players are on the rise as well, such as Siasun Robot & Automation, which has developed robots that can work in close proximity to humans. Chinese-made welding robots are available for less than half the price sought by foreign rivals. If these companies can improve the durability and precision of their offerings, they could displace Fanuc products, further extending the time needed for the company to recoup its investment.

Fanuc's finances are healthy, with zero interest-bearing debt and an 87.7% capital ratio —the result of an aversion to bank loans and a focus on building up a capital cushion. Yet its cash and deposits have fallen by half since fiscal 2014 as the company has worked to improve shareholder returns.

With the spread of coronavirus variants clouding the outlook for the global economy, there are concerns about excessive investment in the industrial robot industry. Fanuc's share price has fallen from a year-to-date high of 29,700 yen in mid-February to as low as 25,000 yen amid concerns about the Chinese market peaking out.

Even so, Fanuc intends to continue investing and returning capital to shareholders, with plans to spend roughly $240 million in 2023 to expand a robot customization facility in China.

Investing with an eye toward return on capital will be all the more important going forward if the company hopes to balance growth investment with payouts to shareholders.

Yamaguchi suggested that a shift in perspective is underway. "In addition to indicators such as market share and operating profit, we need to pay attention to how much profit the capital we invest has generated and will generate in the future," he said.