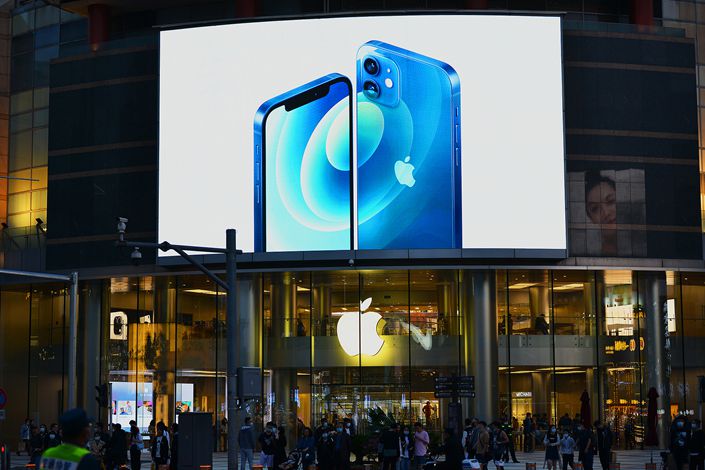 Apple’s flagship retail store in Beijing on May 5. Photo: VCG

A sanctions-hobbled Huawei Technologies Co. Ltd. barely managed to stay in the top five smartphone brands in its home market of China during the first quarter, as it lost share to a surging Apple Inc., according to data supplied to Caixin by IDC on Thursday.

The latest trends in China extend a broader global movement for the pair of smartphone titans heading in opposite directions. Huawei’s home market had been one of its last safe havens, thanks to a strong local sales network and non-reliance on Google’s app store for models sold in the market, as it battled crippling U.S. sanctions that cut it off from the tech giant and many of its other key partners.

Those sanctions have forced Huawei to ration its dwindling supply of 5G chips and other cutting-edge components, even as analysts previously forecast the stockpiles would run out in the first half of this year. As those stockpiles fell, Huawei’s smartphone shipments in China plunged 47% year-on-year in the first quarter to 10.1 million units, giving it 11.7% of the market, according to IDC. The drop left Huawei as the market’s fifth-largest player.

Huawei’s latest figures didn’t include its former lower-end Honor smartphone brand, which Huawei sold at the end of last year to free the unit from the U.S. sanctions that were specifically aimed at Huawei by the administration of former President Donald Trump. Honor’s sales in China plunged by an even larger 62.6% in the first quarter to 3.5 million units, making it the market’s sixth-largest player with a 3.5% share, according to IDC data.

At the other end of the spectrum, Apple’s China shipments surged by 160.7% in the first quarter to 13.2 million units, making it the fourth-largest player with 15.3% of the world’s largest smartphone market.

“Apple has gained a more dominant position now in the high-end segment, which helped it to maintain its growth,” said IDC analyst Will Wong.

As Huawei fell, three of its hometown rivals, Oppo, Vivo, and Xiaomi Corp., moved in to take over the market’s three top spots, respectively, with the trio all reporting strong double-digit gains. Oppo edged out Vivo for the top spot with 20.6 million units sold, slightly ahead of the latter’s 20.5 million, as both reported year-on-year growth of more than 70%.

Xiaomi posted even stronger gains of 92.2% to take the No. 3 spot with 13.5 million units sold, placing it slightly ahead of Apple in terms of sales.

Whereas Apple was the most direct beneficiary of Huawei’s decline, the other three Chinese brands preyed on the struggling company’s advanced distribution and store networks in China to win over those outlets as Huawei phones grew increasingly scarce, said Wong.

“Offline channel expansion and enhancement were the key drivers for the growth of Oppo, Vivo, and Xiaomi,” he said. “These Chinese vendors will still need time to build their premium brand image to fully grab Huawei’s existing user base. Thus, channel expansion strategy such as taking over Huawei’s existing channel partners is the most effective way to gain share now.”

The China trends magnified moves in the more diverse global smartphone market during the quarter, with Huawei’s global sales tumbling 58.6% as it crashed out of the top five to finish the period as the world’s seventh-largest brand. Apple, Xiaomi, Vivo, and Oppo posted strong but more modest global gains in the 40% to 60% range for the quarter.