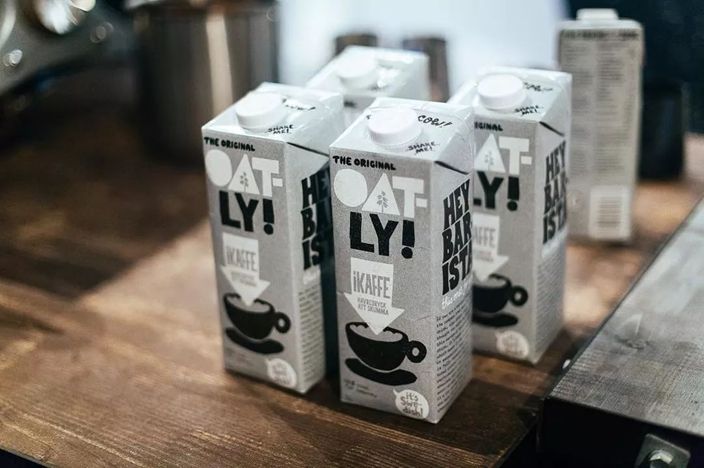 Oatly plans to further expand its business in China, its biggest Asian market, according to the prospectus. Photo: Oatly

Major plant-based milk-alternative maker Oatly Group AB has spelled out its IPO pricing, though questions remain about whether its ties with a Chinese state-owned backer could affect its Nasdaq listing.

The Swedish company expects to raise up to $1.65 billion with an offering price of between $15 to $17 per American depositary share, it said in its updated prospectus on Tuesday. That would give it a $10 billion valuation.

As of March 31, conglomerate China Resources (Holdings) Co. Ltd. and Belgium-incorporated Verlinvest S.A. jointly hold 55.9% of Oatly through the 50-50 joint venture Nativus Co. Ltd., according to the filing.

Oatly has talked up its growth prospects in China where sales are booming — but its relationship with state-owned backer China Resources could be a concern for investors. Chinese-backed companies have increasingly faced regulatory hurdles on American stock markets.

Chinese companies are facing heightened scrutiny from the U.S. authorities. The Securities and Exchange Commission said in March it would start to enforce the Holding Foreign Companies Accountable Act, which passed last December, meaning Chinese companies could be kicked off the country’s stock exchanges if they don’t comply with audit requirements.

Oatly in February entered into an agreement with its shareholders to seek an additional listing in Hong Kong if its IPO or publicly listed status in the U.S. results in a “material adverse effect” or its Asia-Pacific revenue takes up over 25% of the total for two straight fiscal quarters, according to the filing.

Oatly plans to further expand its business in China, its biggest Asian market, according to the prospectus. Last year, Oatly recorded $54 million in Asian sales, quadruple that of 2019. However, revenue generated in Asia only accounted for 12.7% of the total last year, up from 5% in 2019.

“We believe the Asia region, with a primary focus on China, represents one of our largest near term opportunities,” the company said in the filing.

The brand entered the Chinese market in 2018 and, in part due to its partnership with Starbucks, had over 9,500 food service and retail points of sale in the country at the end of last year, the prospectus showed.

Last year on Tmall, one of Alibaba Group Holding Ltd.’s major online marketplaces, it outsold its plant-based rivals by at least three times, based on the Chinese platform’s rankings of brands’ official stores, it said in the prospectus.

The penetration rate of Oatly’s products and other similar milk-alternatives was 16% in China, the company’s prospectus said, citing a study it commissioned. However, what the prospectus calls “traditional plant-based milk” was consumed by 74% of Chinese adults in the three months to January. While the prospectus doesn’t name any such products, it may be referring to soy milk, which is both traditional and common in China.