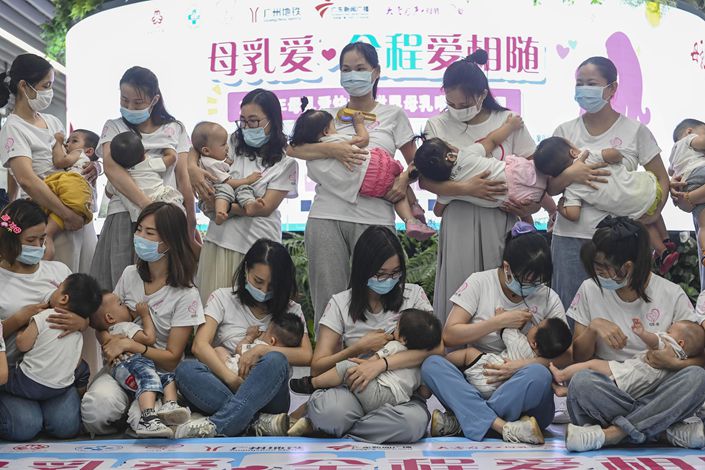 A group of 20 mothers hold their babies during a "breastfeeding flash mob" at Guangzhou Metro Tianhe Park Station in Guangzhou, Guangdong province, on July 31, 2020. Photo: VCG

Yang Yinghua, who lives in Sichuan province’s Nanjiang county, received another tub of free milk powder one day in April.

Yang, with the help of the village doctor, applied for a free tub of milk powder under a program for poor households three months after her son was born. Dissolving two large spoons of powder in warm water creates a sweet concoction. “I feed him powdered milk when my breast milk doesn’t come out,” she said.

In the villages of Nanjiang, one in three mothers receives a tub of so-called “national milk” for free every month. Families judged not to meet the definition of a poor household can get it at a government subsidized price of 98 yuan ($15) per tub, less than half the market price.

The program was launched in 2017 by the Beijing Lianci Healthcare and Poverty Alleviation Foundation. As of June 2020, the program had reached 408 counties in 22 provinces and distributed a total of 4.64 million tubs.

Xue Bin, executive director of the Lianci Foundation, told Caixin that the project aims at both promoting domestic milk powder and making the powder affordable.

However, experts have raised questions about the program. Some have said the Lianci Foundation spreads incorrect information, promoting milk powder as being more nutritious than breast milk. Grassroots health care workers receive money for every tub they help distribute, creating a potential conflict of interest.

In addition, the program clearly contains product marketing. Several medical and public welfare experts criticized the fact that trademarks, brands and other commercial information are prominent in the program

Behind the rapidly expanding program are healthcare institutions that lack strict supervision. Experts believe that the children now growing up in rural and low-income areas will pay the price.

For the many families in Yang’s situation, cheap or free milk powder comes as a boon.

Her family of five relies on the money earned by her husband, who works in construction in the wealthy Fujian province city of Xiamen. A tub of milk powder costs as much as 300 yuan, and the baby consumes as many as four tubs a month. This, plus spending on diapers, can take up more than half the family’s monthly income.

There are two main categories of milk powder recipients: the first category is officially designated poor households which have infants under 3 years of age and can receive one tub for free every month. The second category focuses on rural families with infants, which are not officially in poverty, and can buy milk powder at a reduced price.

The program may be promoting ideas that could hurt the health of both babies and mothers.

The Lancet medical journal published a series of reports on breastfeeding in 2016, which said breastfeeding can reduce infant mortality, benefit broader public health and save money.

Breastfeeding also reduces mothers’ future risk of developing breast and ovarian cancer. This means that women who breastfeed can both save money on milk powder, but also future medical expenses.

However, several surveys have shown that under 30% of Chinese households with infants exclusively breastfeed. That’s not only lower than the world average of 44%, as measured by UNICEF, but even lower than the average of 30% for low- and middle-income countries.

In 2019, a China Development Research Foundation report identified inappropriate marketing and promotion of milk powder as one of the main reasons for China’s low breastfeeding rate. It said that milk powder manufacturers and sellers continue to misleadingly promote their products.

The most concerning area is the promotion of powdered milk for children under 6 months of age, the period during which breastfeeding is particularly important. Media reports from late last year found that the Lianci Foundation’s “national milk” program was distributing milk powder specifically aimed at children under 6 months.

In many communities covered by the program, the promotion of milk powder is being highly integrated into local healthcare institutions, which should be promoting breastfeeding.

A village doctor in Songtao county, Southwest China’s Guizhou province, told Caixin that she is personally paid 300 yuan a month for handing out 60 tubs of milk powder via the program. In Nanjiang, where the population is larger and the volume of “national milk” applications is higher, a doctor could earn as much as 1,000 yuan a month.

Caixin learnt that the Lianci Foundation has even placed special “missionaries” in some medical institutions to promote milk powder.

Unlike village doctors and pediatricians, the missionaries are paid by the Lianci Foundation and have clear performance targets. “At first, if there is no milk powder application or newly-added household each week, there was a cash penalty,” Zhou Min, a missionary at a Nanjiang town’s health center, told Caixin. “Then it changed to counting points, adding a new family is 15 points, selling a tub is 3 or 5 points, and those who do well can get more than 100 points.”

She said that in larger towns, over 400 tubs might be handed out monthly, netting the local missionary up to 5,000 yuan. At monthly meetings, the Lianci Foundation also has “outstanding staff” speak about their experience and encourage others to actively promote the “national milk.”

A number of industry insiders have suggested that grassroots healthcare workers are lured to push milk powder due to the payments they receive. “It is not appropriate for medical staff to participate in such business activities,” said Wang Dingmian, the former chairman of the Guangzhou Dairy Association.

Considering the huge amount of milk powder distributed by the program, the financial scale is pretty sizable. According to official data from the Lianci Foundation, by the end of July 2020, the program distributed about 320,000 tubs of milk powder free of cost and sold over 4 million tubs at 98 yuan per piece as “public welfare aid,” reaching a total value of more than 400 million yuan.

Parents and healthcare workers mentioned in the text are pseudonymous.