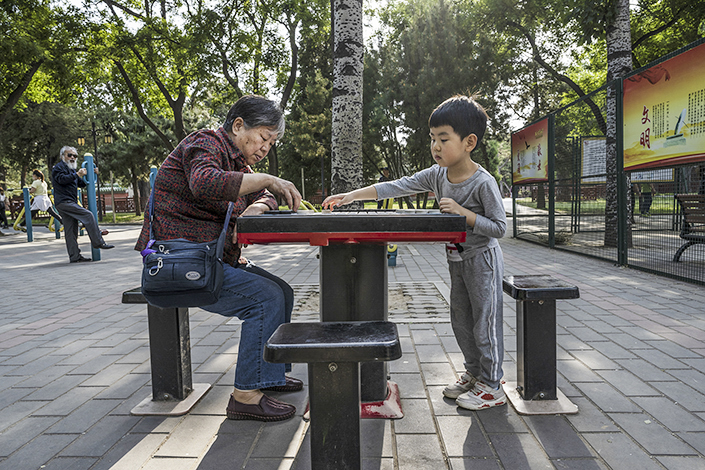 A kid plays Chinese chess with his grandma in a Beijing park on May 12. Photo: VCG

The results of the long-anticipated Seventh National Population Census were recently published. The statistics show that the total registered population is 1.41178 billion, which demonstrates that China is still the most populous country in the world. In the past decade, the population has maintained mild growth momentum. However, this data also exposes trends such as the low fertility rate, expanding aged population and significant downscaling of the working-age population. As the population is a vitally important “long-term variable” in socioeconomic development, once such trends are established, they are extremely difficult to reverse. Therefore, China should make a timely adjustment to its family planning policy and carry out targeted reform to respond to the uncertainties of demographic change on socioeconomic development. The “long-term variable” should be regulated by long-term measures.

In any country, population is a long-standing problem that involves holistic actions and strategies. The Seventh Census offers comprehensive and up-to-date information on the number, structure, distribution and other aspects of China’s population, and reveals the characteristics of its trends, thereby providing reliable support for the formulation and adjustment of relevant policies. As the Seventh Census relied upon experience from previous censuses and employed new technological tools such as big data in various aspects, the data quality has been significantly improved, disclosing more information.

However, there is strong disagreement on the interpretation of the results. One opinion is that China remains the most populous country in the world. Of the growing total population, labor resources are still abundant, the population quality is improving and population movement is still active. Another opinion stresses that the 2020 total fertility rate (recorded at 1.3) of China’s women of childbearing age suggests that China has fallen into the “low fertility trap” accompanied by the expanding aged population. These opinions are both reasonable, but as they are drawn from different perspectives, the conclusions may be quite the opposite on such issues as the “demographic dividend.”

Rather than debating specific issues, emphasis should be placed on fully understanding the intrinsic trait of the population as a “long-term variable,” and designing and formulating future-oriented policies. For example, the public paid close attention to whether China had reached its population peak prior to and after the announcement of the results. Although the data denied that China has reached its population peak, it is only a matter of time. Thus, preparations should be made as soon as possible. Making great efforts to highlight the optimistic data of the Seventh Census will give people the illusion that “the situation is excellent” and misguide the authorities to become complacent about possible policy adjustment. If momentum and opportunities are lacking, it is less likely that the population problem of China will be solved. As such, there is no absence of profound lessons in this census.

Instead of advocating “fatalism” in attaching importance to the “long-term variable” of population, we should strive to give full play to the subjective initiative, which can be effective in manipulating the contingencies of the population trends. What we should do now is try to deal with the uncertainties of demographic change with ascertainable measures.

Aging is a common issue worldwide, and China faces a particularly severe challenge regarding three prominent issues — the largest population, the most rapid growth and the phenomenon of “aging before getting rich.” These are undeniable facts. Some argue that China could make up for its labor shortage by developing artificial intelligence, boosting consumption by accelerating urbanization or allocating state assets to close the pension gap. These proposals are certainly looking in the right direction, but it is uncertain how far they can go.

To cope with the aging population, it is necessary to advance the reform of the social security system. Although there are still many uncertainties in doing so, it is highly promising. This requires establishing a fair, unified and sustainable multilevel social security system which covers the whole population while balancing urban and rural areas, improving the old-age insurance system, accelerating the allocation of state-owned capital to enrich the social security fund, facilitating the long-term balance of the basic old age insurance fund and realizing the unity of basic old age insurance nationwide as early as possible, as well as the continuous improvement of its standards. Regrettably, many related issues have long been debated, but little has been decided or achieved.

In the past few years, China has rolled out its “selective two-child policy” and “universal two-child policy” in succession, but the results have not been as good as some officials and scholars expected, proving again that they lack an accurate understanding of China’s population laws and situation. During the 14th Five-year Plan period, a critical time for the transformation of China’s population policy, great efforts should be made to implement the requirements to “actively implement the national strategy to respond to the aging population” and “promote the achievement of an appropriate fertility level” put forward in the Outline of the 14th Five-year Plan (2021–2025) for National Economic and Social Development and Long-Range Objectives Through the Year 2035. The related policies include the formulation of a long-term population development strategy, optimization of the fertility policy, improvement of the population service system with the focus on “young and old,” development of more inclusive fertility policies and integration of fertility and socioeconomic policies. For many of these goals, China still has a long way to go. A number of realistic problems, including the soaring prices of school district houses, severe shortage of child care institutions and school crunch, cannot be solved through childbirth encouragement alone.

Irreversible as the trends of sub-replacement fertility and social aging are, their impacts on China’s economic and social development are controllable, depending on human effort. Covering the labor shortage through AI, for example, is not self-fulfilling. Instead, it can only be accomplished by deepening supply-side structural reform, implementing the principle of competitive neutrality, giving full play to the decisive role of the market in resource allocation, advancing the sufficient liquidity and rational allocation of production factors and encouraging the survival of the fittest in the market. Boosting consumption through accelerated urbanization also requires accelerating the reform of the household registration system, improving the level of basic public services and residents’ equal access to them.

It should be admitted that people previously lacked due respect for the laws of population development under the misconception that the population could be increased or decreased in a planned, proportional manner, which reflects the planned economy thinking on the population issue. Even today, some people still insist that China’s population will not fall into negative growth. Around the time the “universal two-child policy” was launched, some scholars persisted in saying that China’s population policy was “completely correct” and there was no need to adjust it at all. These misconceptions should be ascribed to both wrong ways of thinking and interest factors. The Seventh Census, however, has forced us to reflect on China’s population issue seriously, deeply and comprehensively. Regarding the “long-term variable” of the population issue, rather than being unconcerned or overly pessimistic, China should work hard and plan ahead.