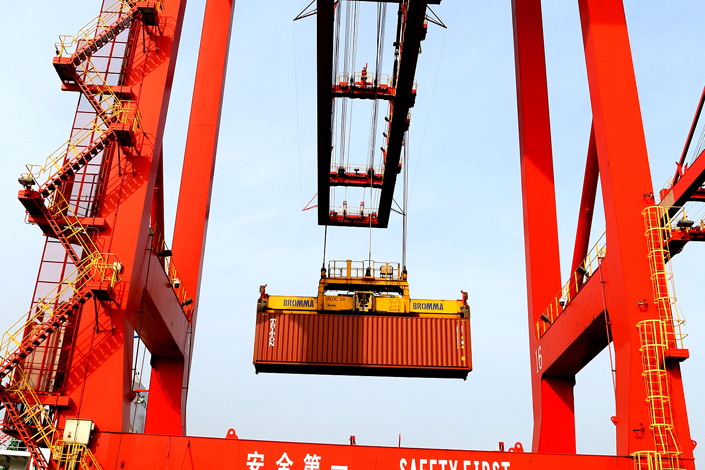 Goods are transported at the Lianyungang container terminal on March 8. Photo: VCG

As the world waits for U.S. and Chinese officials to start talking again to resolve their trade war, both sides have been extending exclusions to punitive import tariffs imposed on each other’s goods at the height of the dispute in 2018 and 2019.

In the latest move, China said it will continue to allow a batch of 79 goods imported from the U.S., comprising certain raw materials and chemical and industrial products, to be exempt from retaliatory levies until the end of the year, according to a statement (link in Chinese) from the Customs Tariff Commission of the State Council published Monday. The one-year exclusion expires this Tuesday and is being extended until Dec. 25.

The new administration of President Joe Biden has also been extending tariff exclusions on some Chinese goods. On March 10, the office of the U.S. Trade Representative (USTR) announced that 99 categories of medical products including equipment, cleaning supplies and personal protective equipment would continue to enjoy exemptions until Sept. 30. The goods were included in the Section 301 tariffs imposed by the Trump administration and the exemptions were set to expire on March 31.

PIIE: Here’s How Much China Has Bought From the U.S. Under the Phase One Deal

China has in total allowed tariff exemptions on four batches of imports covering more than 160 products, with most exclusions announced after it signed the phase-one trade deal with the U.S. at the beginning of 2020. All have been extended when they were due to lapse.

Although the two countries have avoided an escalation of the trade war since the phase-one trade deal was signed, there have been no high-level talks for a phase-two agreement, either under the Trump administration or since Biden took office in January. Earlier this month Katherine Tai, the new USTR, said in a Financial Times online event that while she had not yet met with China’s top trade negotiator, Vice Premier Liu He, she expected to do so in the “near term,” although she didn’t give a more specific timeframe. Any decision to remove some of the tariffs imposed by former President Trump will depend on talks and the U.S.’ assessment of the phase-one deal, she said.

China has taken note of Tai’s comments, Gao Feng, spokesperson for China’s Ministry of Commerce, said (link in Chinese) on Thursday, reiterating that both countries should address each other’s concerns through dialogue and consultation.

Under the phase-one trade deal, China committed to purchasing an additional $200 billion of U.S. goods and services by the end of 2021 taking 2017 numbers as a baseline. Separate targets were set out for each year for agriculture, manufactured and energy products, and for services. But Bloomberg News estimated in January that China failed to meet its 2020 targets, partly due to disruptions caused by the Covid-19 pandemic, purchasing only 60.4% of targeted manufactured products and 64.4% of agricultural goods.