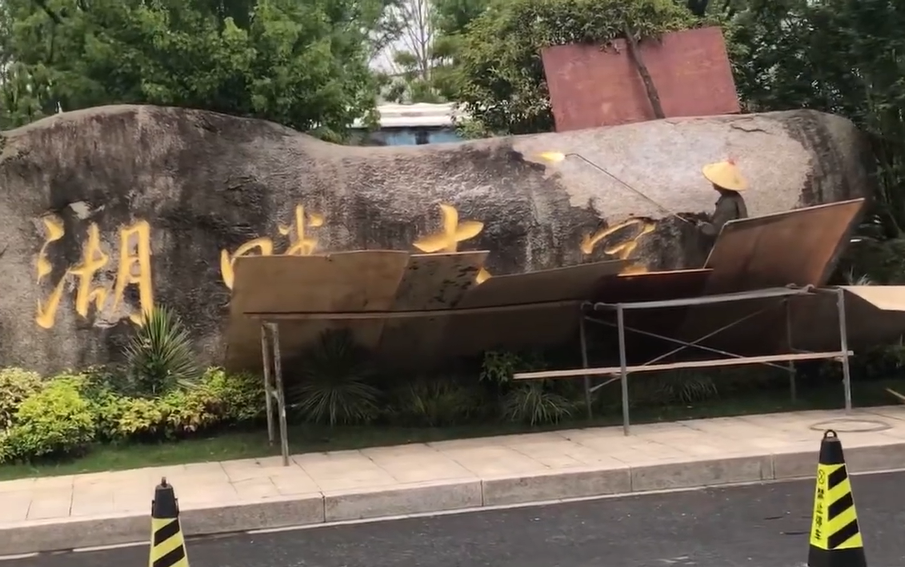 A video of a worker using a blow torch to blast away the Chinese characters for “university” from a stone sign inscribed with the name of a Alibaba-backed private business school has been met with mockery by Chinese social media users, who viewed the clip 29 million times as of Wednesday afternoon.

The story of the video, which appeared under the hashtag #Hupan-Academy-changes-its-name, suggests that the e-commerce giant might be out of favor with the government as Hupan Academy’s illicit use of “university” in its Chinese name had managed to escape the notice of authorities for years until this week.

In a response to the video, the 6-year-old Hupan Academy vowed to clear up the issue of its name. “Since its establishment, Hupan has been a private institution registered with the Civil Affairs Department and not listed as an academic education institution. In order to avoid any misunderstanding, we have renamed it the Zhejiang Hupan Entrepreneurship Research Center, it said.

Founded in 2015, Hupan Academy was set up with the backing of Alibaba to teach established business bigwigs how to run their companies more sustainably.

Alibaba founder Jack Ma noted that the school valued its own sustainability as well. “We want Hupan to run for 300 years,” Ma, the school’s founding president, said when welcoming the first students.

In March, the private school failed to post commencement dates for its spring student intake, leading commenters to wonder if the school had suspended operations amid a crackdown on internet platforms that fined Alibaba of 18.2 billion yuan ($2.8 billion) for antitrust violations.

Meituan University and Oppo University, which are still under construction, have so far retained their names.

Social media users saw the story of the Hupan Academy’s name change as a chance to poke fun at what they perceived to be a private club for the wealthy. One much-lauded comment said that the institution’s purpose must be to teach people “how to make their families rich forever, across generations.”

Another comment reminded readers that Hupan Academy was never a university in the first place. “It must have been magic that this institution was able to obtain university status when others have to go through a strict approval process.”

“I had thought Hupan Academy was even better than 211 and 985 schools,” one seemingly misled reader wrote, referring to the names of the grants that the government gives to China’s top academic institutions. “But it turns out that it’s not even a university at all.”

Many Weibo users took a crack at renaming the place, with “Lakeside Club”, “Capitalist Club” and “996 Wealth Research and Promotion Center” — a reference to the Ma-approved punishing work culture at China’s tech firms — coming out on top.

And what should students spend their time studying at such an institution? Maybe, “how to capture a market, create a monopoly, influence government policy, and reorganize Chinese data,” one commenter said.