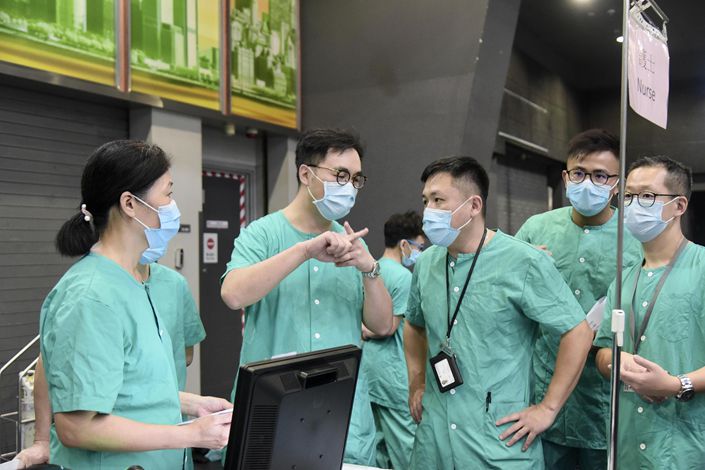 Hong Kong is planning to hire more foreign-trained doctors to plug a severe staffing shortage in its public health system, with legislation expected to be passed by the end of this year.

Chief Executive Carrie Lam has approved the Medical Registration (Amendment) Bill 2021 which will be submitted to the Legislative Council on June 2, said Sophia Chan, secretary of the Food and Health Bureau, at a press conference Tuesday.

The proposal will allow overseas-trained doctors who are already permanent residents to practice in local medical institutions without needing to pass a licensing exam. They will qualify to apply to be a registered doctor in Hong Kong after five years — a period that is far less than the city’s normal registration procedures.

“Introducing non-locally trained doctors will help increase the number of doctors in Hong Kong able to cope with the aging population and the growing demand for services,” said a spokesman for the city’s Hospital Authority.

However, many local doctors have expressed concerns over the proposal, saying local graduates might have fewer job opportunities after it comes into effect, Caixin has learned. Arthur Li Kwok-cheung, a member of the city’s Executive Council, also said “a vast majority of doctors” are now rejecting the plan as they care more about their own interests than the community.

The special administrative region’s doctor shortage is getting progressively worse. There will be a shortfall of 1,610 doctors by 2030, increasing to nearly 2,000 by 2040, according to a 2020 report into medical manpower.

Hong Kong has a ratio of two doctors per 1,000 people, far lower than the Chinese mainland and other countries, public figures show. The number of doctors per thousand people in Russia and Australia are 4.3 and 3.8, respectively.

The lack of doctors has led to patients experiencing longer waiting times in public hospitals. Hospital Authority data show that a patient who wants to see a specialist has to wait for more than 30 weeks after registration, while the waiting time for seeing a physician can be as long as 133 weeks.

Chan said that under the proposal, eligible candidates must be permanent Hong Kong residents with valid medical certificates from a list of non-locally recognized medical schools. They are also required to have practiced outside the city and to have worked in the city’s public health system for at least five years after getting their specialist qualifications.

Currently, unlike overseas-trained doctors, a local medical student who wants to apply to be a registered physician needs to undergo at least 12 years of university study and specialty training, Caixin has learned, with licensing exam pass rates being less than 50%.

There were 396 overseas-trained doctors listed in Hong Kong in the period from 2011 to 2020, accounting for 11% of the total number registered in the city, Chan said. Although the number and percentage had increased, they were not enough to solve the shortage problem, he added.

The proportion of non-locally trained doctors in New Zealand, Australia and the U.K. over the same period was 24%, 32% and 30%, respectively.