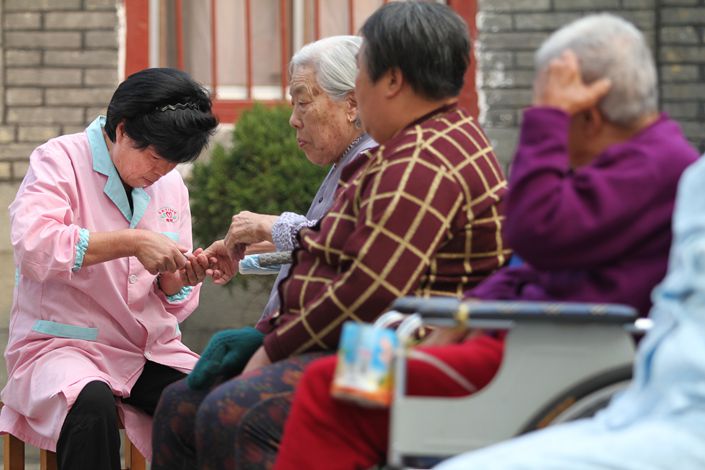 China faces a future defined by an aging population and a declining birthrate, according to the results of its Seventh National Population Census. The challenge of pensions for the elderly has again come under the spotlight, and this idea has recently been floated: establish a national elderly care investment organization whereby every eligible Chinese person is allotted a sum of money, the staggering sum of which is then pooled and invested in stock, bond and other asset markets.

The idea has two implications. One is about wealth redistribution, which is generally done by the government; whether that is good or bad is not what I want to discuss. The other is to fund the entire population’s pensions with long-term investments, which seems reasonable on the surface but is in essence like asking them to get up off the ground by hoisting themselves up by their own hair.

There are two implications in returns from the asset market. First, it mirrors economic growth, with the coefficient “beta” indicating the market’s trend to go up in the medium and long terms. Second, it implies there will be a fight for earnings, with those of the winners known as “alpha.”

In any case, a huge elderly care investment body that aims to secure the future of the populous should not pursue “alpha.” It is neither fair nor safe. Such an organization is only likely to grasp the “beta.” “Beta,” however, is essentially economic growth itself. When people create it, they are enjoying it. It cannot be consumed twice.

It is possible for some people to gain returns through investment — “some” is the keyword here — but not the entire population. The “some” subset benefits from growth created by the economy as a whole, as “external resources” — another keyword to pay attention to — and can take “beta” from the market, but serves as a perpetual motion machine generating pensions for the larger population. Why? The large population cannot enjoy external resources through the market but only invest in themselves, and have no other means to support their pensions in the long run. Is this feasible? If so, then perpetual motion is also attainable.

Care for the elderly is a serious problem in China. Ideally, as the population increases, population structure is optimized and productivity improves, and there is essentially no problem. But if the population ages and shrinks, we have to rely on improving productivity. If this cannot be achieved, a number of problems may arise, and longstanding issues in this regard would lead to a decline in living standards. This is a cause-and-effect issue and has nothing to do with investment in asset markets. Moreover, there is no guarantee that long-term market returns will continue in the future.

If the demographic structure deteriorates and productivity growth stagnates, the market will only leave us with negative yields. There is no perpetual motion machine to fix the pension problem, so the idea of Chinese people collectively investing in their own asset markets for their pensions simply won’t work. An economy with a healthy population structure and positive productivity growth need not worry about elderly care; on the other hand, can the people in an economy with an aging population and stagnant productivity growth be supported in old age by investing in domestic asset markets?

In fact, small countries have been saving their elderly care resources through long-term investment for some time. Take the Government Pension Fund of Norway, for example. To establish the fund, Norway first acquired a massive resource — Norway’s vast export revenues from the North Sea oil fields — and then invested around the world, diversifying its portfolio across multiple asset classes and markets. This is the only way to alleviate internal pension challenges: reap the fruit harvested by pursuing and sharing high productivity worldwide, make incremental gains through investment and absorb external resources to pull the country out of the “perpetual motion machine” trap and alleviate internal pension challenges.

If these conditions are not met, if we instead rely solely on economic and stock market trickery, we will only be left blindfolded in the end. Essentially, China’s elderly care problem can only be solved by optimizing the population structure and improving productivity. The task at hand is not an easy one, but must be undertaken nonetheless. Financial mechanisms alone cannot cover the pension gap, and the process of allocating funds may even create new gaps.