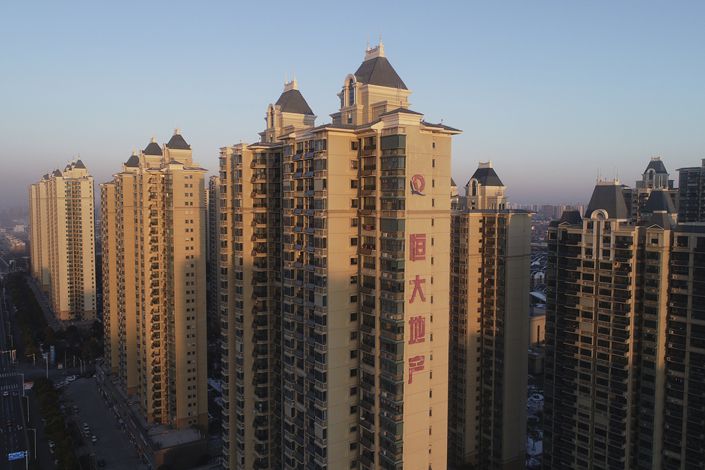 China’s debt-laden developers will likely need to scale back growth and resort to other means to avoid defaults. Photo: VCG

(Bloomberg) — A tightening of Chinese developers’ use of secretive funding is threatening to curb growth in the world’s second-largest economy.

For years, China’s property developers have drawn on shadowy pools of capital to fund their projects. Now, government scrutiny is reining in that system, after already curbing traditional avenues of funding. Debt-laden developers including China Evergrande Group will likely need to scale back growth and resort to other means such as equity financing and spinning off more assets for financing to avoid defaults.

“Polarization among Chinese developers will deepen this year, and more developers are likely to suffer from debt failures,” said John Sun, co-managing partner at Aplus Partners Management Co. Ltd., which focuses on private equity and credit investments. Weaker developers “will need to sell assets to fight for survival, while some will likely default on their debt.”

That hunt for new funding is adding pressure on the nation’s cash-strapped developers, which already account for nearly 27% of the more than $20 billion of missed bond payments this year, according to data compiled by Bloomberg. The constraints will dampen investment in property and the pace of construction activity, Macquarie Group’s China analyst Larry Hu predicts.

The funding is often masked as equity offerings that are debt-like in nature, or guarantees to joint ventures or associates that borrow on developers’ behalf, Cheng said.

Guarantees to joint ventures accounted for about 9% of total debt issued by Fitch-rated developers last year, based on Fitch estimates, reaching a record 460 billion yuan ($71 billion).

It’s outside the Chinese mainland where the impact on developers has been most telling. One of the popular approaches in the past three years has been using so-called orphan special purpose vehicle structures to issue private debt, said Chen Yi, head of global capital markets at Haitong International Securities Group Ltd.

Under such a structure, the issuer of the debt is an orphan that is not an affiliate or subsidiary of a company, so the debt won’t appear on the companies’ balance sheet.

Private debt issued by orphan special purpose vehicles have declined due to tighter regulations such as the “Three Red Lines,” said Chen.

Such financing activities in the offshore market “peaked last year,” Chen said. “Developers have become more disciplined this year as rating agencies have been asking borrowers for more transparency on their off-balance sheet borrowing and so do the regulators.”

That’s not to say off-balance sheet financing will disappear, though it will be used more sparingly and for more targeted activities. For instance China’s centralized land-bidding policy means developers need to amass large amounts of cash in a short period of time to win land.

Companies that rely on joint ventures for financing could see such off-balance sheet debt accounting for as much as 40% of their debt, said Cheng.

It spells trouble for one of China’s biggest growth drivers. Real estate contributes to about 29% of China’s economic output if its wider influences are factored in, according to a joint research by Harvard University and Tsinghua University.

The sector’s investment growth could moderate to 4% compared with 7% last year, Hu said. A key measure of construction pace could decline 4% this year, he added.

In face of these headwinds, Chinese developers might need to rely on more equity offerings and spinoffs to meet their financing obligations. Evergrande is taking some of the most aggressive steps, pledging to list an online sales platform and water business, as well as planning a secondary listing of its electric-vehicle company onshore under a goal to cut its $100 billion debt by half. Evergrande didn’t respond to emailed requests for comment.

Haitong’s Chen expects the offshore equities market will remain a bright spot for developers seeking funds. “We will continue to see more developers go public in Hong Kong this year given limited access to other funding channels,” he said.