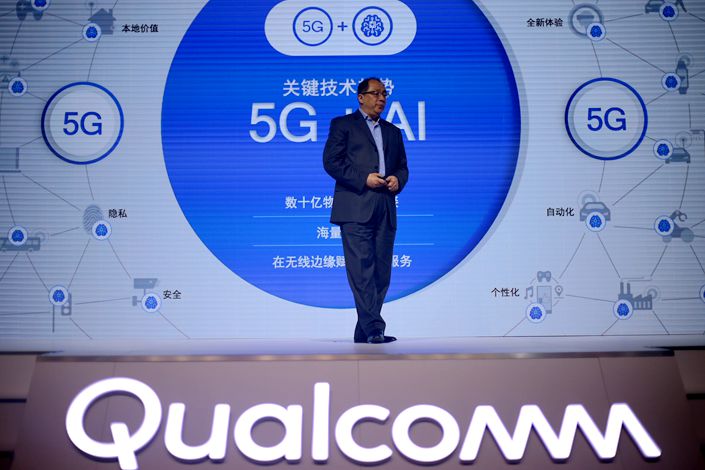 The chip shortage now plaguing the global car sector resulted from a perfect storm of two major factors, including automakers’ own underestimation of how quickly their sector would rebound as the pandemic eased, the China chief of global chip giant Qualcomm Corp. said.

Qualcomm is one of the biggest among a field of global chipmakers that engage exclusively in product design, and then outsource actual production to third-party manufacturers like Taiwan’s TSMC and UMC. But those third-party manufacturers have become overwhelmed with more business they can handle since around the start of the year as the auto sector bounced back faster from the pandemic than many carmakers had expected.

As carmakers were cutting back their future orders last year due to low expectations for 2021, the other factor of the perfect storm was shaping up with booming demand for chips used in PCs, routers, smartphones and other devices that people used to work from home during the pandemic.

“As (carmakers) were slashing their capacity, a new form of demand was rising,” said Qualcomm China Chairman Meng Pu at an industry event on Friday. “So when the carmakers came back to the chipmakers (seeking more production), they found out there was no capacity.”

But Meng, who also goes by Frank Meng, was quick to point out that political factors could help to ease the pressure on automakers that are having to curb production for lack of the numerous chips that are needed to power today’s cars.

He pointed out that carmakers are often major contributors to their local economies, including as big employers. As a result, he said, any pain being felt by such companies in the form of parts shortages or other factors will quickly be transmitted to local government officials who will then “ask a barrage of questions” in an effort to ease the problem.

“The only thing we can guarantee is that no carmaker will have to halt production due to (lacking) Qualcomm chips,” he joked at the event.

Qualcomm has been a major beneficiary of the boom for computing devices, since chips that power many of the world’s smartphones are its bread and butter. Smartphone demand has boomed so far this year, with global shipments rising 25.5% to 346 million in the first three months of 2021, according to IDC. While the latest first-quarter gain partly owed to depressed figures from 2020 as the pandemic was starting, it was also up by 11% from the 312 million smartphones shipped in the first quarter of 2019 before the outbreak.

PC shipments saw even bigger growth to nearly 84 million units shipped in the first quarter from 54 million and 58.5 million in the same quarter of 2020 and 2019, respectively, IDC data showed.

Like many others, Meng acknowledged the current chip shortage is lingering longer than previous shortfalls for the notoriously cyclical industry.

“Generally, there will be a shortage in our industry every three years,” he said. “But in the past, it was not more than nine months (because) the industry could adapt through adjustments in price and the turning on of production lines. But it’s been longer this time and had bigger impact partly because demand is growing faster than the industry can supply, and partly because the industry has misjudged demand.”