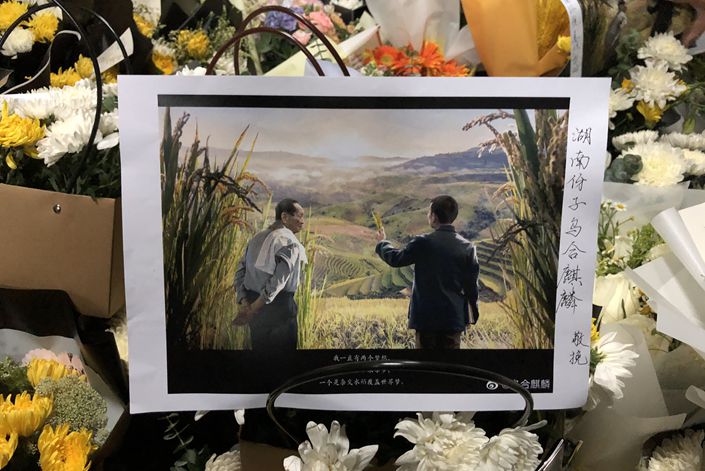 A farewell ceremony for Yuan Longping was held at the Mingyangshan Funeral Home in Changsha, Central China's Hunan province, on May 24. Photo: VCG

China is mourning the death of Yuan Longping, a Chinese agronomist known as the “father of hybrid rice,” who was renowned for developing high-yield hybrid strains that lifted millions out of hunger.

Yuan, 91, died Saturday of multiple organ failure in Changsha, the capital of Central China’s Hunan province. His memorial service was held Monday morning at the Mingyangshan funeral parlor, with thousands of residents flocking to the site to lay flowers in memory of Yuan.

As a household name in China, the agronomist was the pioneer of research and development of hybrid rice in the country. He spent more than five decades researching improvements in the staple crop that have fed nearly one-fifth of the world’s population with less than 9% of its total land. Since then, Yuan’s hybrid rice strains have been grown in more than 60 countries and regions.

Tributes flooded across the country following the passing of Yuan, with President Xi Jinping setting the tone for condolences to Yuan’s family on Sunday, saying he made “significant contributions” to China’s food security, agricultural technology innovation and world food development.

This was echoed by the Ministry of Agriculture and Rural Affairs, who said in a statement that Yuan’s death is “a great loss to the country’s agriculture.” Qu Dongyu, director-general of the Rome-based Food and Agriculture Organization of the United Nations, wrote on his Twitter account that Yuan “devoted his life to the research of hybrid rice, helping billions achieve food security.”

As of Monday morning, the hashtag “#Yuan-Longping-died” had attracted more than 7 billion views and more than 14 million comments on Weibo, China’s Twitter-like social media platform.

In search of sturdier, higher-yielding rice during the 1960s, he experimented with cross-breeding natural varieties with a wild rice variant. This led to Yuan’s breakthrough development in 1974 of the first high-yield hybrid rice variety, which boosted annual yields by more than 20% compared to traditional rice. Since 1976, the hybrid rice has been widely grown across the country.

“I have always had two dreams,” Yuan said in an article published by state-run newspaper the People’s Daily. “The first dream is to pursue high yield and higher yield of rice and the second dream is having hybrid rice planted throughout the globe.”

In 1986, Yuan simplified the breeding process for hybrid rice down to a single strain of rice from two and previously three lines. This improved agricultural efficiency by saving labor and cost.

Yuan was also working with scientists to develop a rice that can be genetically modified as part of efforts to meet the country’s agricultural goals, but many concerns arose over the safety, nutritional value and seed cost of such rice.

In 2017, Yuan became an internet sensation after a video showing him delivering a speech on hybrid rice in English at a forum in the eastern city of Qingdao went viral. Many young people in China responded to his upbeat attitude to life.

In September 2019, Yuan, an academician of the Chinese Academy of Engineering, was awarded with the Medal of the Republic, China’s highest honor, for his contributions to China’s food security, scientific development of agriculture and the world’s food output, one of many honors he received at home and abroad.

“These are not my personal honors, but the honors for China,” Yuan once said. “I’m just a disciplined leader and a representative,” he added.

The 91-year-old agronomist remained personally active in research in Sanya, the popular coastal resort city in the southern province of Hainan, until falling in a rice paddy in March. He was then sent to the hospital for treatment.

During his final days, his daughter-in-law said hybrid rice research remained on Yuan’s mind and that he hoped his students would carry it still further.

Born in 1930 in Beijing, Yuan began his career as a researcher focusing on the breeding and cultivation of potatoes and tomatoes but switched to rice in 1960.