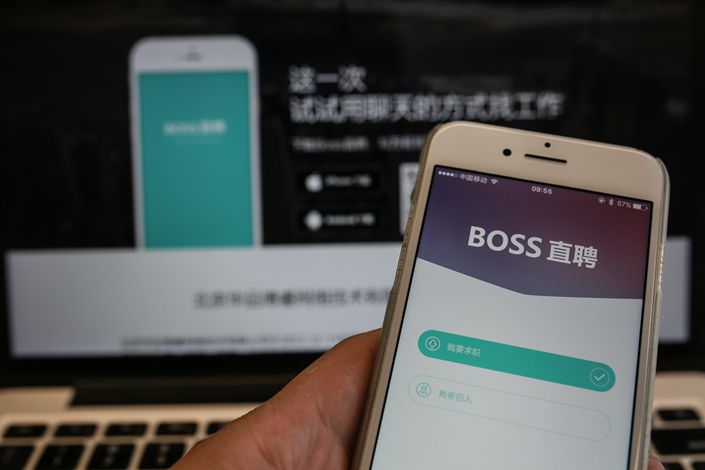 Online recruiter Kanzhun, operator of popular Boss Zhipin platform, says it has a shot at profitability if it can reign in big marketing expenses. Photo: IC Photo

Tencent-backed online recruiter Kanzhun Ltd. has filed for a U.S. IPO, betting investors will trust it has a great career ahead of it even as its marketing expenses continue to keep it deep in the red.

Kanzhun, which operates the popular Boss Zhipin platform, filed for a Nasdaq listing on Friday with an initial fundraising target of $100 million, although that figure often goes up or down depending on investor demand. The company said it would use the proceeds primarily on research and development (R&D) and marketing.

Its prospectus reveals that its already substantial losses swelled again last year even as it almost doubled its revenue. In 2020, it booked a net loss attributable to shareholders of 1.23 billion yuan ($187.9 million), compared with 734.4 million yuan in 2019. Its total revenue grew 94.7% to 1.94 billion yuan.

Founded in 2014, Kanzhun primarily relies on corporate clients, who in 2020 and the first quarter of this year contributed about 99% of its revenue. In 2020, Boss Zhipin averaged 19.8 million monthly active users, up 73.2%, the prospectus shows.

Sales and marketing expenses were equivalent to 91.8% and 69.3% of total revenue in 2019 and 2020, respectively. The declining proportion could mean that its branding activities grew more efficient, but the company admitted in the filing that “we will need to continue to monitor and manage our sales and marketing expenses if we are to achieve profitability in the future.”

Kanzhun also flagged in the filing that user misconduct could continue to damage its brand image and operations. In 2018, for example, the company was sued by the family of a 23-year-old jobseeker who was found dead after falling victim to a pyramid scheme they found through a bogus job ad posted on Boss Zhipin. Last year, the platform was again put under the spotlight when some users were found to be using the platform to recruit women for sexual services.

“We have implemented control procedures on our online recruitment platform to detect and block illegal or inappropriate content and illegal or fraudulent activities,” Kanzhun said in the prospectus.

Personal information protection has been another focus of regulatory supervision in the recruitment space. In March, the annual consumer rights show of China’s national broadcaster criticized some of Kanzhun’s rivals such as Zhaopin Ltd. and Hong Kong-listed Tongdao Liepin Group for selling jobseekers’ data.

China’s personal information protection rules are “constantly evolving and can be subject to different interpretations or significant change from time to time, making the extent of our responsibilities in that regard uncertain,” Kanzhun warned.

Internet giant Tencent Holdings Ltd. is the second-largest shareholder of Kanzhun, holding 12.2% of the company through a Hong Kong unit, according to the prospectus. Capital Today Evergreen Fund, Kanzhun’s largest shareholder, has a 14.7% stake via a subsidiary.