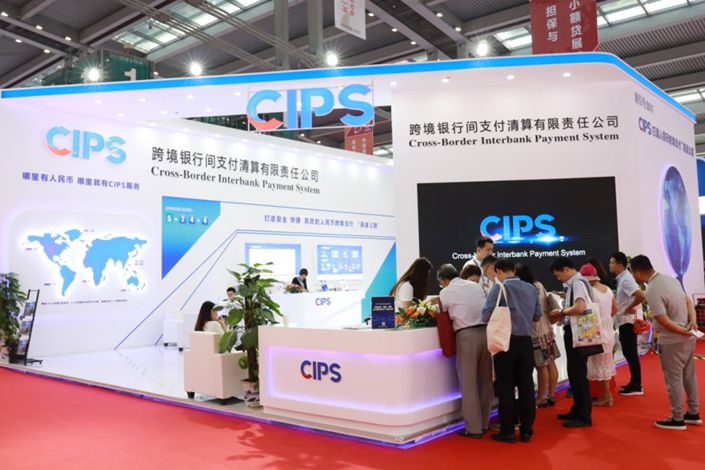 China has ramped up efforts to promote its cross-border clearing and settlement system for yuan-denominated transactions as it seeks to boost the paltry use of the currency around the world.

Although China still has a long way to go to foster the widespread use of the Cross-Border Interbank Payment System (CIPS), analysts believe that in the long run, the system will play an increasingly important role in promoting the internationalization of the yuan.

Here are four things to know about the CIPS.

Launched in 2015, the CIPS has been dubbed an “expressway for RMB internationalization.” The title somewhat explains the system’s goal — to improve the efficiency of processing global payments denominated in the yuan, the Chinese currency also known as the renminbi (RMB).

To understand how the CIPS works, it helps to first take a look at how cross-border payments work. When a bank customer wants to transfer money to someone in another county, the banks at both ends require three systems to finish the transaction: One is a messaging system that allows them to exchange key information with each other, such as the amount of money to be transferred, as well as the bank account that will receive the money.

And as banks usually process many payments each day, it is more efficient and cheaper to make the transfers in batches rather than one at time. The transfers go through a second system — a clearing system that can serve as an account book to record the value of each payment and calculate the net amount of money that needs to be transferred to the counterparty bank within a certain period of time. After that’s done, the banks transfer the net amount of money via a third, settlement, system. It is worth noting that real-time clearing and settlement services are also available.

Before the CIPS was launched, the clearing system for global yuan payments was more expensive and less efficient. To create that system, China set up a clearing bank at each of major offshore yuan trading hubs, such as Hong Kong, Singapore, London and Frankfurt. To process yuan-denominated payments under this system, foreign banks are required to open an account at a local clearing bank that links to the domestic banking system in China to finish the clearing process. Because of time zone difference, the system can sometimes delay the processing of payments.

The CIPS clearing system largely solved the problems. It operates during the work hours of almost all financial markets in every time zone.

Why is China so keen on promoting the CIPS?

The CIPS is part of China’s efforts to globalize the yuan. In recent years, rising tensions between China and the U.S. have added urgency to that goal.

The U.S. dollar’s dominance in global transactions and pervasive American payment tools across the global markets have become a weapon for Washington to use against other countries during geopolitical disputes. In 2012, Bank of Kunlun Co. Ltd., a city commercial bank controlled by Chinese state-owned oil and gas giant China National Petroleum Corp., was banned from directly accessing the U.S. financial system because it was found to have provided financial services to Iranian banks that were blacklisted by the Washington.

Some analysts suggested that China should increase the use of the yuan in global transactions to reduce its reliance on U.S. dollars.

How many institutions use the CIPS?

By the end of April, some 1,171 institutions in 100 countries and regions across the globe have used this system, said Xu Zaiyue, president of CIPS Co. Ltd. He said the value of payments processed via the CIPS increased 33.4% year-on-year in 2020, accelerating from 28% (link in Chinese) growth in 2019.

How far has yuan internationalization come?

China still has a long way to go to make the yuan a global currency. In April, 1.95% of global payments were denominated in the yuan, making it the sixth most active currency for global payments after the U.S. dollar, euro, British pound, Japanese yen and Canadian dollar, according to the latest monthly RMB tracker released by the Society for Worldwide Interbank Financial Telecommunication, the global financial messaging system used by most of the world’s banks. Considering that China’s GDP accounted for roughly 17% (link in Chinese) of the world’s economy in 2020, it’s not exactly a large share.

Zhu Liangtao contributed to this article.