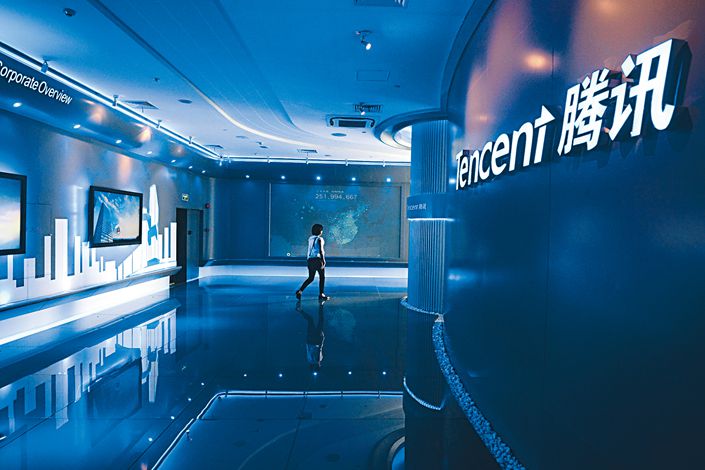 Tencent itself has played down the potential impact on the business of having to establish a financial holding company. Photo: IC Photo

Tencent Holdings Ltd. — billionaire Pony Ma’s sprawling gaming, technology and financial empire — has been told by regulators to put its finance-related business into a new financial holding company where they can be better supervised, multiple sources close to the matter told Caixin.

The reorganization of the company’s multibillion-dollar financial operations, which span mobile payments, lending and insurance, follows a rectification plan imposed on rival Ant Group Co. Ltd. earlier this year. The move signals a widening crackdown on the aggressive expansion by tech groups into financial services fueled by concerns over potential systemic risks to financial stability and their outsized market power after years of relatively unchecked expansion.

China’s top financial authorities summoned 13 tech companies including Hong Kong-listed Tencent to a meeting on April 29 to tell them they will be subject to stricter compliance requirements on their financial operations. Participants from Tencent were asked to stay behind after the main gathering ended and given further “window guidance,” the sources said.

Regulators have not yet specified what financial businesses Tencent will need to inject into the financial holding company, but are waiting for the company to submit its own plan first before telling it what to do, according to the sources.

Tencent, which has built up a commanding presence in social media and gaming in China, provides a range of financial services from its nonbank payments platform WeChat Pay, operated by its subsidiary Tenpay Payment Technology Co. Ltd., to wealth management platform LiCaiTong (理财通) and online lending services provided by its 30% owned WeBank Co. Ltd.

The internet giant’s fintech business is worth between $105 billion and $120 billion, according to estimates by analysts from AllianceBernstein LP, a U.S. brokerage, with the payments business worth about $70 billion to $80 billion, and credit, wealth management and insurance accounting for the remaining $35 billion to $40 billion.

Backed by more than 1.2 billion monthly active users of its ubiquitous social media app WeChat, Tencent’s fintech business has grown rapidly over the past few years and industry insiders expect it will at some point surpass its games business as the biggest contributor to the company’s revenue.

Revenue from its fintech and business services — involving payments, wealth management and other services including cloud — grew by 47% year-on-year to 39 billion yuan ($6.1 billion) in the first quarter of 2021, boosting its share of the company’s total revenue to 29% from 23% in 2018, according to its latest financial results released in May.

Its core games revenue has grown at relatively stable but unspectacular rates, including a 17% rise year-on-year in the first quarter to 43.6 billion yuan which accounted for about 32% of the total.

WeChat Pay accounts for around 40% (link in Chinese) of the country’s third-party mobile payments market, second only to Alipay, the rival platform run by Ant Group, but industry insiders generally think WeChat Pay has a large user base and higher user engagement due to its link to the WeChat app.

Incorporating WeChat Pay into the financial holding company will involve an internal management adjustment as WeChat Pay is overseen by two departments –– the WeChat social media platform and Tenpay Payment, a source close to Tencent said.

Tencent-backed online lender WeBank offers loans to individuals through its WeChat-based Weilidai (微粒贷) lending service which dominates the market along with Huabei (花呗), Ant Group’s lending product, according to industry insiders. It is also working to expand lending to more small businesses. WeBank’s outstanding loans grew by 22.8% year-on-year to 200 billion yuan at the end of 2020, including 80 billion yuan in loans for micro and small enterprises with credit lines below 10 million yuan, a business that saw growth of 156%, according to its annual report (link in Chinese).

Some analysts have pointed out that incorporating WeBank into the financial holding company will increase regulatory costs for Tencent. The lender is already a licensed bank which puts it under the supervision of the China Banking and Insurance Regulatory Commission, but as part of the holding company, it will then be subject to central bank oversight. Tencent does not hold a controlling stake in the lender, although it is the biggest shareholder with 30% of the equity.

Wealth management platform LiCaiTong, which is based in the WeChat division, has more than 200 million users with its aggregate customer assets exceeding 900 billion yuan at the end of 2019.

Analysts expect that, as with Ant Group, setting up a new holding company will be a constraint on Tencent’s business operations and its expansion owing to the stricter capital requirements it will need to meet. Under new rules that went into effect on Nov. 1 last year, all financial holding companies will need to have paid-in capital of at least 50% of the total registered capital of all the financial institutions they control and have the ability to replenish their capital as needed.

However, some analysts say the impact on Tencent will be less severe as it hasn’t been as aggressive as Ant Group in expanding into areas such as consumer lending, relying on the business more as a cash cow.

Read More
In Depth: The Rectification and Remaking of Ant Group

The revamp of Tencent’s fintech business into a financial holding company will be largely neutral to its operations, and the potential financial impact should be manageable, Fitch Ratings said in an April 5 report. Its emphasis on risk control and focus on cooperation with financial institutions in its fintech business should help mitigate the regulatory risk, it said.

The organizational change is expected to consolidate and simplify the shareholding structure of Tencent’s fintech assets while the capital injection requirement should not be a significant cash drain considering Tencent’s internal resources, Fitch Ratings said, although it did not give a figure for how much additional capital the company might need.

Tencent itself has played down the potential impact on the business of having to establish a financial holding company.

“(Setting up) the financial holding company in itself is neutral in nature,” Tencent President Martin Lau said during an earnings call in March. “It does involve organizational change, but doesn’t really impact the (fintech) businesses.” Lau reiterated that the company has been prudent in terms of risk management and operated in strict compliance with rules and regulations, and will continue to do so.