By Wang Bowen and Yang Ge 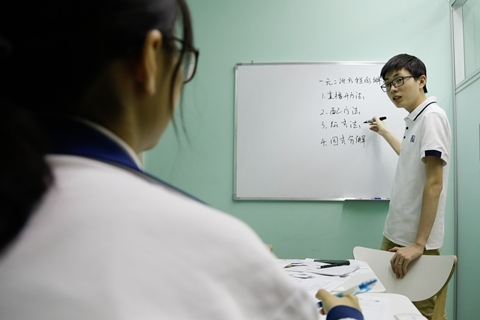 Rumors of a clampdown on the booming sector for private tutoring services have been circulating for several months, following growing public outcry over an ultra-competitive education system. Photo: VCG

China may be preparing to ban private educators from going public, comments given to Caixin by a local official in Beijing showed, as part of a rumored crackdown to ease the burden on Chinese students from excessive extracurricular study programs.

Rumors of a clampdown on the booming sector for private tutoring services have been circulating for several months, following growing public outcry over an ultra-competitive education system that pressures parents to enroll their children in cram schools or risk having them lose an edge to their peers.

Shares of China’s bumper crop of publicly listed education companies have taken a major beating as the rumors heated up last week, with many losing a fifth of their value or more. Competition among such schools themselves is also ultra-competitive, with many of those companies having yet to earn any profits.

Signals of a looming crackdown came in rumors on Monday that the education commission of Beijing’s Haidian District – home to many of China’s top univerisites and thus considered a leader in the field – had banned all educational organizations under its purview from carrying out IPOs.

Such listings have been a key driver of the sector’s explosive growth in recent years, since investors have felt more comfortable pouring funds into new companies knowing they can cash out later, once those firms go public.

Investors are enticed by the sector’s big business potential due to parents’ willingness to spend lavishly on their childrens’ education. The trend has received a boost in the last five years with the rise of online tutoring, which enables companies to rapidly scale their offerings nationwide.

When questioned by a Caixin reporter on rumors of such an IPO ban, a worker at the Haidian education commission said the office had already forwarded a central government directive within the district, without specifically commenting on the directive’s content. The person added the commission had no official statement.

The directive mentioned by the worker was related to a document passed by a central government commission last Friday on easing the burden on students tied to excessive extracurricular education. In addition to addressing issues like certification, advertising and pre-payments to such institutions, the commission also took aim at the sector’s commercialization.

An IPO ban would be one of three planks to a broader campaign that is rumored to be part of a crackdown. This would also include a ban on classes on weekends and holidays, and a ban on advertising. These details appear in a document circulating online that reportedly came from the Haidian education commission. But the commission later issued a statement questioning the document's reliability.

The rumors have led to a major sell-off of education shares over the last few days, most of them listed in Hong Kong and New York. Shares of traditional classroom-oriented TAL Education plunged 27% between last Friday and Monday, while New Oriental Education fell by 21% over that period. Both stocks made back some of the ground on Tuesday.

High-tech education plays, which mostly use the internet to deliver their instruction, were also hard hit. GSX Techedu shares have lost about 20% of their value since last Friday, while Meten EdtechX Education Group had lost more than 30%.