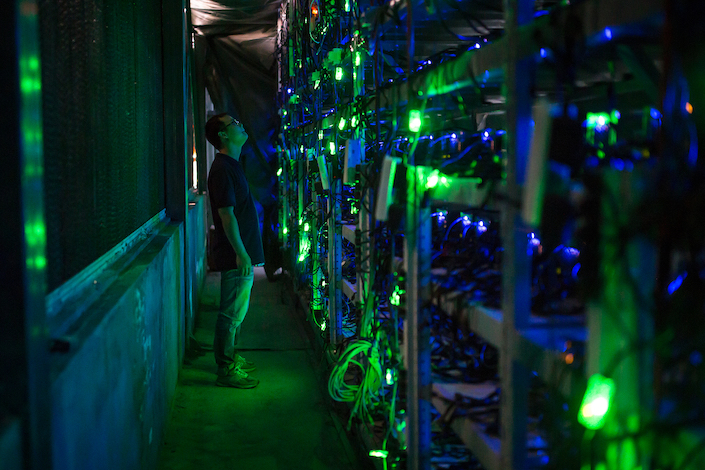 Mining equipment in a Bitcoin mine in Sichuan, China.

China’s National Development and Reform Commission (NDRC) outlined the next steps in the restructuring of energy prices during the 14th Five-Year Plan in an action plan issued Tuesday. Pricing of power transmission and distribution should be further overhauled; the market-oriented restructuring of on-grid prices should continue; the pricing mechanisms for wind power, solar power and pumped-storage hydroelectricity should be improved; and a pricing mechanism should be established for new energy storage, the commission said. As for high energy-consuming and high-emission industries, green electricity price policies — such as differential or tiered pricing — should be adjusted to facilitate energy conservation and carbon emissions reduction. In addition, the restructuring of petroleum and natural gas prices should make steady progress to meet the requirements of a “national pipe network,” while the pricing mechanism for the pipeline transport of natural gas should also be improved, the NDRC said.

North China’s Inner Mongolia divulged more plans to crack down on cryptocurrency mining, including the closing of businesses, as part of its efforts to slash energy consumption over the next few years. The autonomous region’s government would revoke the license of any telecommunications and internet companies that engage in cryptocurrency mining, according to a list of proposed measures issued Tuesday for public comments by the Inner Mongolia Development and Reform Commission.

Contemporary Amperex Technology Co. Ltd. (CATL) will release sodium-ion batteries in July, the company confirmed to Caixin. The company did not disclose specific information about the new product. The advantage of sodium-ion batteries is that they may alleviate the battery industry’s current dependence on imported lithium, according to Huaan Securities. Lithium batteries’ main area of application is electric cars. According to data from the China Automotive Power Battery Industry Innovation Alliance, domestic installed capacity of batteries reached 31.6 gigawatt-hours from January to April 2021, a year-on-year increase of 241.1%.

Zhejiang New Energy Investment Group Co. Ltd. (600032.SH), a subsidiary of Zhejiang Energy Group Co. Ltd., hit the main board of the Shanghai Stock Exchange Tuesday, becoming the fourth listed unit of Zhejiang Energy Group. The offering price was 3.51 yuan ($0.50) a share, 30.03 times of the company’s earnings. Zhejiang New Energy issued 208 million shares, accounting for 10% of total equity. As of the end of 2020, its operational power stations had installed capacity of 268.61 million kilowatts, which included 794,200 kilowatts of hydroelectricity, 1,573,550 kilowatts of photovoltaic electricity and 318,300 kilowatts of wind power.

The State Administration for Market Regulation (SAMR) gave notice it plans no further investigation into suspected illegal concentration of business operators, Minmetals Development Co. Ltd. (600058.SH) said. According to the regulator’s preliminary investigation, Minmetals established Minmetals E-Commerce Co. Ltd. in May 2012, and Alibaba Group Holding Ltd. acquired a 44% stake in the business in May 2016. SAMR decided not to investigate the deal any further under China’s Anti-Monopoly Law, the company said.

Hubei to set up fund for peak carbon dioxide emissions

Hubei province will push for the establishment of a comprehensive platform for green, low-carbon industrial services and plan for construction of the Yangtze River International Industrial Park, a local newspaper reported. As green finance is already established, an official in Wuhan said the city will seize the opportunity to set up a special “peak carbon dioxide emissions” fund and a guidance fund for green and low-carbon industries to steer capital toward the green industry.