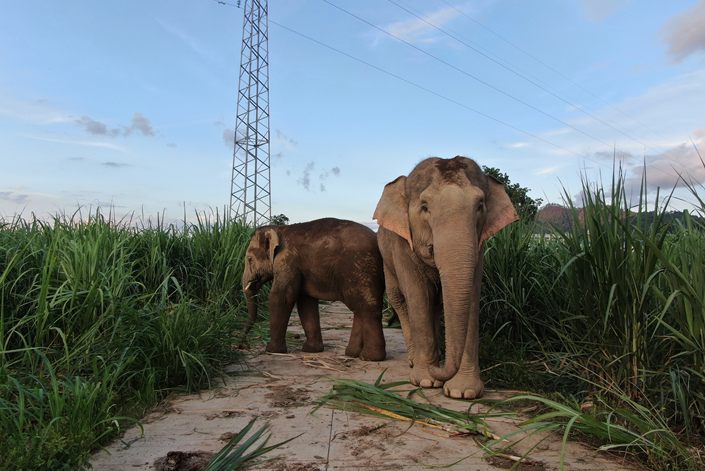 In Yunnan province in the far southwest of China, a caravan of 15 wild Asian elephants is heading north, captivating social media users across the country.

Experts and readers are puzzled by the route they’ve chosen and alarmed by their proximity to urban areas.

According to a blog on Phoenix Media, the herd of baby and adult elephants were livestreamed entering Eshan county in Yuxi, Yunnan, on Thursday and walking down a main road in an urban area. Residents in their path were evacuated, and those further along the herd’s route were alerted. The alarm sounded by local authorities also protected the baby elephants from being hit by cars.

The Provincial Forest Fire Brigade used drones and reconnaissance trackers to assist in keeping an eye on the herd in Eshan, reporting that it had left the urban area at 2 a.m. on Friday.

The 15 Asian elephants reportedly originated in an elephant reserve in tropical Xishuangbanna Dai autonomous prefecture. In December, they paid a visit to the neighboring city of Pu’er, a famous tea-growing region. By April, they had moved north and crossed into Yuxi.

The elephant caravan has damaged 842 acres of crops in the process of moving northward over 40 days, with economic losses estimated at 6.8 million yuan ($1 million).

Animals are one of the themes of the month on Chinese social media, with tigers and leopards and now elephants driving traffic. A popular comment was directed at Yunnan locals. “Reminder: if you encounter wild elephants, don’t stick around! First — you can’t outrun them. Second — you can’t beat them. Third — they can’t control their temper as well as you!”

Yunnan natives living outside the province saw the incident as a reinforcement of stereotypes about the tropical, forested region. “It was hard enough convincing people from outside Yunnan that the place wasn’t full of wild elephants. And now this! I have nothing left to say.”

Let’s not forget that this drama still ongoing, as of the time of publication. With the elephants making a rare trip north, who knows where they’ll end up? One reader remarked: “My father has been hooked on this story. And where will they head to next? [Yunnan’s capital] Kunming?”