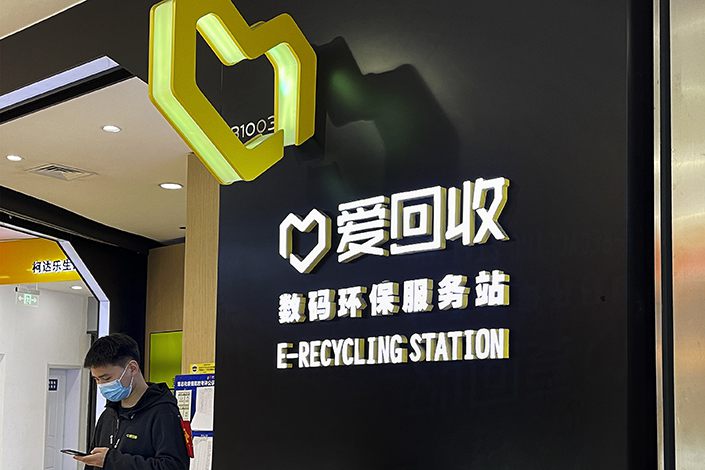 Aihuishou suffered net loss and negative net cash flows over the past few years, though the loss was narrowing, its prospectus showed. Photo: VCG

Chinese electronics reselling platform Aihuishou International Co. Ltd. identified negative operating cash flows as well as its dependence on e-commerce giant JD.com Inc. as key risks in its filing for an IPO on the New York Stock Exchange on Friday.

One of the largest second-hand goods platforms in China, Aihuishou — which has renamed its brand “ATRenew” — makes money by selling second-hand phones and other consumer electronics, and providing related services. Its largest single investor is e-commerce giant JD.com, whose subsidiary holds 34.7% of its total issued and outstanding shares before the IPO, according to the prospectus.

The company said it aims to use the money to improve its technology. Reuters reported in April that the firm would seek between $500 million and $1 billion.

Aihuishou had suffered net loss and negative net cash flows over the past few years, though the loss was narrowing, the prospectus showed. Last year, the company reported 470.6 million yuan ($71.8 million) in net loss, down from 704.9 million yuan in 2019.

The company also had tight liquidity, with net operating cash flow dropping to negative 412.9 million yuan, lower than the previous two years. Its cash and cash equivalents declined to $100.3 million at the end of March from $140.2 million at the end last year. “We may incur substantial losses and negative net cash flows from our operations in the future,” the prospectus read.

There are also positive signs. Aihuishou’s net revenues rose to 4.9 billion yuan last year, up from 3.9 billion yuan in 2019, and total consumer products transactions rose 48.4% last year. And the firm’s blending of online and offline stores in order overcome the trust gap associated with second-hand goods has caught investor attention.

A major risk comes from its close link to JD.com, the company said. Aihuishou’s business relies to a large extent on its strategic cooperation with JD.com but such cooperation comes with some “requirements,” which means that the cooperation may weaken if Aihuishou cannot meet those requirements, according to the prospectus.

But some analysts don’t see Aihuishou’s risk exposure to JD.com as a problem. “I don’t think the close relationship with JD.com is a vulnerability per se; the quality of merchandise is a key concern for secondhand goods, and the association with JD.com provides some helpful credibility,” said an e-commerce analyst at a mid-sized fund house who asked not to be named due to company policy. “Logistics (and reverse logistics) are also key pain points that a partnership with JD.com can alleviate.”

China’s second-hand consumer electronics sales industry is booming as a large number of devices have been left idle while people with relatively low disposable income have a strong demand for cost-effective pre-owned electronics, the prospectus said.

From 2015 to 2019, the number of mobile phones recycled annually in China increased from 56.3 million to 85.7 million, with a compound annual growth rate of 11.1%, according to a report released last year by Leadleo, a commerce research institute.