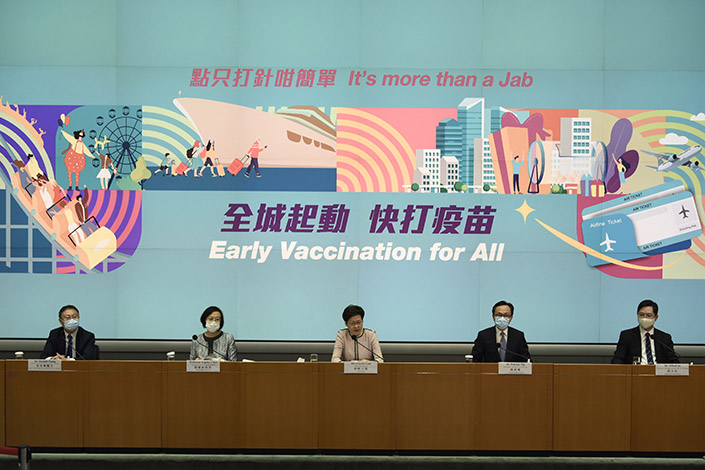 Hong Kong is using both carrot and stick to encourage residents to get Covid-19 jabs as the city tries to boost its sluggish vaccination rate while it continues to record low numbers of infections.

If a fifth wave hits Hong Kong, unvaccinated residents could be banned from entering “high-risk places” such as restaurants and schools, said Secretary for Food and Health Sophia Chan Siu-chee at a press conference Monday.

Responding to criticism that this measure was excessively punitive, Chief Executive Carrie Lam said on Tuesday that its purpose was to avoid the “one-size-fits-all measures” that disrupted schools and businesses last year.

A day earlier, the government rolled out a campaign that aims to “significantly” raise the city’s vaccination rate over the next few months.

“We hope to complete the work before September,” Lam said. “Therefore, even if there’s a fifth wave of the coronavirus, all walks of life will not be affected too much and more than 1 million students will be able to go back to school safely in the new school year.”

Since late April, Hong Kong has allowed bars, nightclubs and karaoke parlors to reopen and operate past midnight for vaccinated residents.

However, the vaccination rate remains low.

The government-owned subway operator said it will hand out 500 passes to vaccinated people that’ll let them ride the subway for free all year. There’s also a lucky draw that’ll see 60,000 flight tickets handed out to those who’ve gotten their jabs.

Hong Kong’s two major theme parks, Ocean Park and Disneyland, will give coupons to visitors who have had at least one dose through June 30. Disneyland is offering free gifts each worth HK$250 ($32.22) to the first 1,000 daily vaccinated guests through June 28.

The city has seen single-digit daily Covid-19 cases for 33 straight days, with seven new infections reported Tuesday. Hong Kong has so far confirmed more than 11,800 coronavirus cases with 210 deaths, according to government data.

Bloomberg contributed to this article