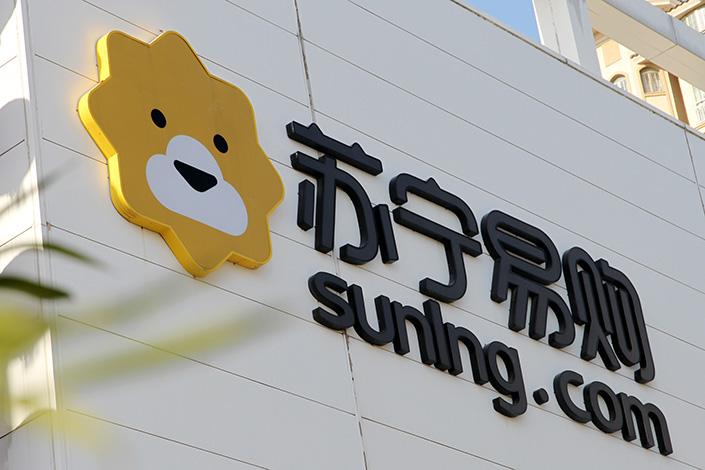 Jiangsu province-based Suning.com said Wednesday 5.59% of its shares will be transferred to a fund started by four state-owned enterprises which are ultimately controlled by the provincial government. Photo: VCG

Chinese retailing giant Suning will receive a 3.2 billion yuan ($500.6 million) temporary bailout from a state-controlled fund as the owner of leading football club Inter Milan struggles to pull out of a liquidity crisis.

On Wednesday, the Jiangsu province-based Suning.com Co. Ltd. (002024.SZ) said 5.59% of its shares will be transferred under the bailout to a fund started by four state-owned enterprises which are ultimately controlled by the provincial government.

The shares are controlled by an affiliate of Zhang Jindong, the chairman of Suning.com, which currently holds 19.7% of total shares, according to a company filing (link in Chinese). The transfer price will be 6.12 yuan per share, 90% of the closing price Tuesday.

The transfer plan is another attempt by Suning to attract investment to resolve liquidity problems which started to escalate late last year.

As the offline retailing giant struggled to carve out a niche in e-commerce, it has come under increasing financial pressure from a wide range of initiatives that have yielded lackluster results.

Read more
In Depth: How Suning Fell Into Crisis as JD.com Surged

In February, Suning.com announced a $2.3 billion share sale of nearly a quarter of the company to state-controlled entities in southern economic hub Shenzhen, part of a state bailout.

The latest share transfer will be temporary, as Zhang has promised a buyback in 10 months at a price no lower than the sale price, plus interest at the annual benchmark lending rate, or 3.85%.

Last month, two Jiangsu province-based arms of the government body that oversees major state-owned assets agreed to set up a 20 billion yuan fund with the parent of Suning.com. The fund would be used to invest in its best-performing assets and businesses, a move expected to give the company more breathing space to grapple with its heavy debt load.

Once a retailing pioneer, Zhang wanted to build Suning into a Walmart-plus-Amazon of China entity and undertook aggressive expansion between 2015 and 2019, investing in real estate, telecom, sports streaming and football clubs.

But the shopping spree and losses from its core retail business dragged Suning into the current liquidity crisis.