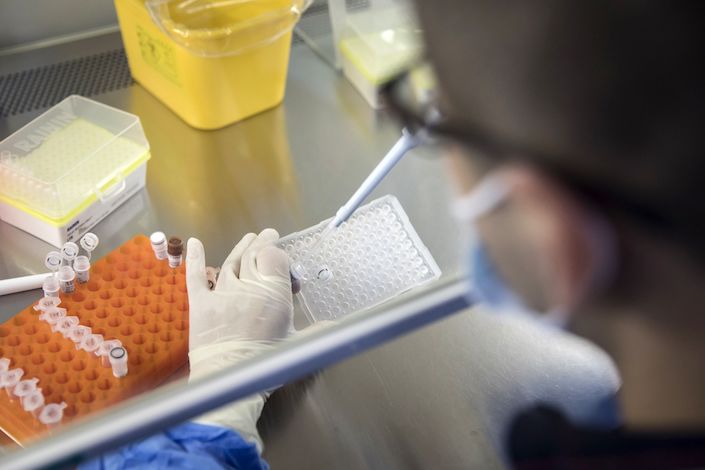 A technician demonstrates the process of transferring cell samples into a vial at the Gracell Biotechnology Ltd. research laboratory in Shanghai. Photo: Bloomberg

(Bloomberg) — A coming wave of Chinese cancer drugs could provide patients cheaper alternatives to some celebrated and costly therapies, but gaining traction in the U.S. will mean going up against some of the global pharmaceutical industry’s most lucrative and well-protected franchises.

Such sums have attracted the interest of China-based companies like Junshi Biosciences Co. and Innovent Biologics Inc. They aim to offer similar treatments at lower prices and win over patients and payers on the pharmaceutical giants’ most precious turf. Their treatments have shown promise in studies, yet the complex U.S. health system could limit their ability to compete.

Immune oncology drugs transformed therapy for a broad array of cancers over the past decade and won the technology’s pioneers a Nobel Prize in 2018. Most of the drugs block proteins called PD-1 and PD-L1 that interfere with the immune response to tumors. But in the U.S., a year of therapy costs as much as $175,000.

The high cost has frustrated U.S. health officials. Richard Pazdur, director of the U.S. Food and Drug Administration’s Oncology Center of Excellence, went so far as to encourage Chinese companies to undercut U.S.-developed checkpoint inhibitors on price during a medical meeting in 2019.

“A lot of people in the U.S. — literally, these drugs bankrupt them,” said Brad Loncar, a biotech investor and chief executive officer of Loncar Investments. “These drugs are so huge that tens of billions of dollars could be at stake here. So much money could be saved for the health-care system.”

Bristol-Myers prices drugs based on factors including value, scientific innovation, development costs and access, the company said in an email. Merck said it continues to explore ways to improve access to and affordability of its medicines.

China has granted 20 approvals to checkpoint inhibitors, according to a May report from Mizuho. But as yet, no Chinese-made versions have sold outside the country.

U.S. physicians and payers polled by Cowen & Co. said the low-cost inhibitors could win as much as 30% of the market, according to a separate May report. In any case, China’s drugmakers will have to charge lower prices to compete with Western rivals, said Yaron Werber, a managing director and senior biotechnology analyst for Cowen.

“A high-quality, reputable new entrant backed by new data and a 30% to 50% price concession we think would get noticed,” he said in an interview.

How Chinese drugmakers will sell their products in the U.S. remains to be seen. Blockbusters like Keytruda and Opdivo have been approved for dozens of cancers, meaning rivalry may occur on a disease-by-disease basis as data emerges for different forms of cancer. That is likely to put companies like Junshi at a disadvantage in the byzantine U.S. payer system.

“How would a payer say, ‘I’ll pay for one drug in this indication, but not Keytruda, which I pay for in these 17 different indications?”’ said Mara Goldstein, an analyst at Mizuho Securities Co. “The market isn’t as sophisticated as that.”

Price competition and positive data will not be enough to break into the U.S., said Alexis Borisy, chief executive officer of closely-held EQRx Inc., which is collaborating with China-based CStone Pharmaceuticals on a potential low-cost therapy for non-small cell lung cancer. Their PD-L1 inhibitor sugemalimab showed promising results in a late-stage trial in China.

Even with those boxes checked, “the harder part is rewriting how the whole commercial model of this industry works and getting the drugs adopted,” Borisy said in an interview.

One early Chinese PD-1 entrant is likely to be Junshi’s toripalimab for nasopharyngeal cancer. A late-stage trial found that a combination of the drug with chemotherapy outperformed the standard treatment alone, according to research released Thursday at the American Society of Clinical Oncology’s annual meeting.

Patients who got the combination were less likely to experience a worsening of their cancers, according to the study, which will be presented Sunday in a plenary session. The researchers also noted a 40% lower risk of death among patients who got the Junshi drug along with chemotherapy.

If approved, toripalimab could be the first such drug available for the condition in the U.S., leaving “no reason nor necessity to price it low,” Junshi Chief Executive Officer Li Ning said in an interview. He expects it to be priced at 80% to 120% of similar medicines developed by Western pharmaceutical companies, suggesting it could be more expensive for certain tumor types.

As the company moves into more competitive areas like lung and gastric cancer, however, “our market strategy will be different,” he said.

Other Chinese makers of checkpoint inhibitors are working with Western partners. Junshi paired with Coherus Biosciences Inc., a maker of cheaper copies of biologic drugs, and has a partnership with AstraZeneca Plc on toripalimab. BeiGene Ltd. is working with Switzerland’s Novartis AG, while China’s Innovent Biologics Inc. and Indianapolis-based Eli Lilly & Co. filed for U.S. approval of a lung cancer treatment in March.

Price-cutting strategies for cancer drugs in China were initially aimed at grabbing market share from foreign competitors like Merck and Bristol-Myers. Starting in late 2018, domestically developed checkpoint inhibitors from Junshi, Innovent and others started to flood China’s market — now the world’s second-largest for drugs — often selling for much less than Keytruda and Opdivo.

But to reach most of China’s market, drugmakers must get their medicines covered by state medical insurance, and that means reducing prices further. Innovent’s checkpoint inhibitor was granted coverage in 2020 after a 60% price cut. This year, three other Chinese inhibitors — from Junshi, Beigene and Jiangsu Hengrui Medicine Co. — joined the list after agreeing to drop prices by 80%. No foreign-made checkpoint inhibitors are covered.

Junshi is not going down the same path as it tries to enter the U.S. market, where drugs become blockbusters by showing superior efficacy and safety rather than selling dirt cheap, Li said.

“It will never end up in a competition the way it is now in the China market,” he said.